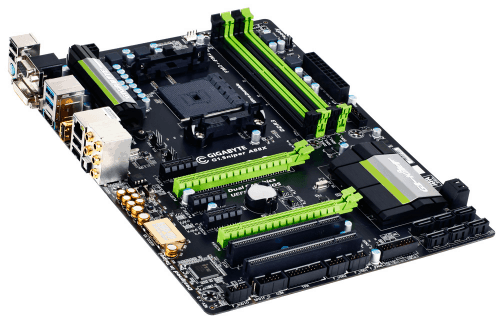 It has taken a long time for many companies to bring attention to the Red and Black team. Although at COMPUTEX 2014, we saw a lot of other companies take notice, GIGABYTE was there pretty early on with something for AMD fans in their G1.Killer Gaming line up. Although I would still like to see a G1.Sniper motherboard for the AMD FX Series, it looks like GIGABYTE has done a fine job with AMD’s APUs. Plus, there was little ground lost by the A Series 6800K in a recent review, so when it comes to gaming, the GIGABYTE G1.Sniper A88X might be just what an AMD fan needs. 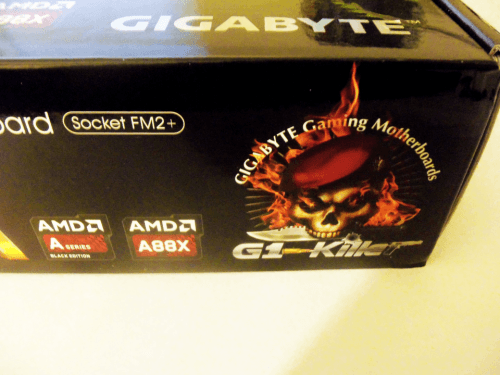 The GIGABYTE G1.Sniper A88X is unique in that it is the first time the company has used the brand for an AMD board. It is built on the latest FM2+ design with an A88X (Bolton D4) FCH, FM2+ socket, and fully utilizes all the features AMD brings to the table on that chipset, including backwards compatibility for older FM2 Trinity and Richland APUs. Features such as AMD AMP support up to 2400 Mhz RAM, AMD dual graphics, CrossfireX support, eight SATA 6.0 Gb/s ports, four USB 3.0 ports, and nine USB 2.0 ports, round out the feature set for this impressive AMD based board.

The crowning feature of the GIGABYTE G1.Sniper A88X is the high-end audio system which is several features in one. The rear I/O USB 2.0 ports is a USB DAC-UP port with an independent power delivery system to ensure your external DAC has clean, fluctuation free power. There is also has the GIGABYTE AMP-UP, allowing users to change the Op-Amp to better suit their audio their needs. Finally we have the Gain Boost with either 2.5 or 6.0 amplifications modes for higher end audio headsets with high impedance loads. All these features are built on top of the Realtek ALC898 chipset with Nichicon Pro Audio Caps, and other components that enhance the audio experience.

Designed to work with the existing AMD APUs, the G1.Sniper was designed to pair with a Kaveri (Steamroller architecture) chip. When paired with an FM2+ Kaveri APU, the G1.Sniper A88X will provide support for native 4K resolution output via HDMI 1.4a port and support for PCIe 3.0. To protect and enhance your system, all GIGABYTE software/BIOS features come standard, which include Dual BIOS, EasyTune, On/Off Charge, @BIOS, etc.

The GIGABYTE G1.Sniper A88X is impressive on paper at the very least, and has good availability in the marketplace with an an MSRP of $114.99 US, but can be had for as low as $104.99US.

Let’s see what else you get with this already impressive motherboard. 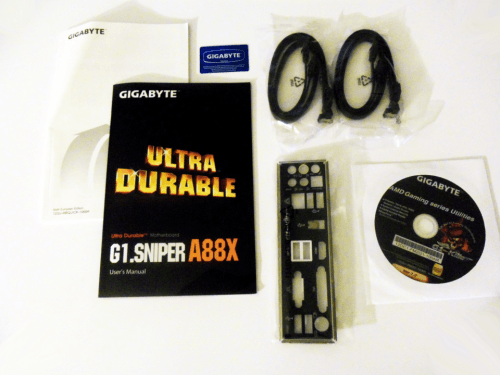 There are some good things and some bad things going on when it comes to the included items for the GIGABYTE G1.Sniper A88X. You of course get the standard items such as the motherboard itself, the I/O shield, the user manual, and the quick start guide. A nice surprise was the inclusion of 4 SATA cables. I was expecting to see only two with a board priced in the $115 MSRP range. The two extra cables can mean a world of difference as most common gaming builds need at least three to accommodate an SSD, HDD, and an optical drive.

As mentioned earlier, one of the crowning features of the GIGABYTE G1.Sniper A88X is the audio system, in particular, GIGABYTE AMP-UP. This is a great feature, but the IC extractor tool is not included, as it is with other G1.Killer boards in this series. This could be frustrating for those who do decide to switch the AMP without reading the manual first. We can see many users removing the current Op-Amp with knives, pliers, etc. which is not an ideal solution. It would have been a great if the $1 tool was included.

Setting aside potential board level upgrades (and issues), let’s get a closer look at what you do get in the box! 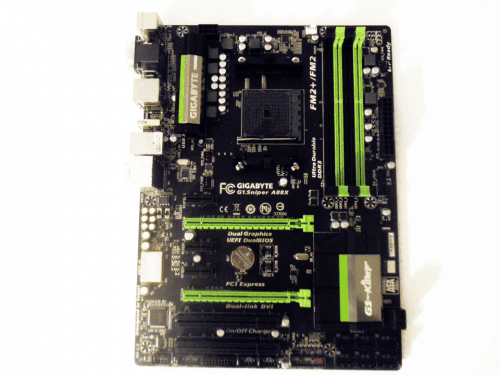 Clad in the signature G1.Killer lime green colors with silver accents, the GIGABYTE G1.Sniper A88X wastes no time impressing us. All of the gold caps, gold audio plate, and gold audio jacks on the rear of the board bring a lot of attention to themselves as well. Everything on the board looks as though the designer suffers from acute OCD as every chip, diode, cap, etc. is lined up in rows. This gives the overall design a clean look and a sense of quality. As if someone really cared to give AMD fans a great experience.

The audio section of the G1. Sniper A88X is especially interesting. You will find that there are two dip switches just below the Op-Amp. This allows you to switch from the 2.5x boost to 6x boost by flipping both switches. We find it strange to include two dip switches here when only two settings are possible. Could this not be done with just 1 dip switch? Or maybe they could use the two switches to allow four levels of boost? Who knows.

Another interesting feature is that the audio section is electrically separated from the rest of the board, signified with a green LED outline. This is to prevent interference from other components on the board, muddying up your audio experience. We wish we could show this to you, but we could never get a clear picture of it without green glare. It is definitely eye-catching if you have a case with a clear side, but is obscured by any expansion slot cards such as your dedicated GPU, once assembled.

Now lets put the GIGABYTE G1.Sniper A88X to the test and see if it’s all flash, or ready for you to flash the cash!