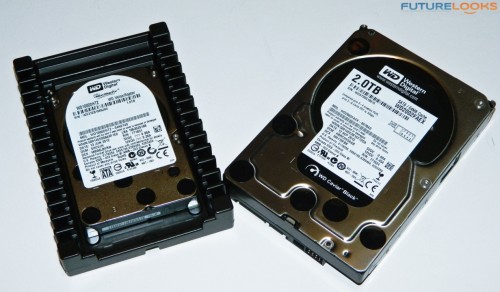 In the past couple years, Intel has said that SSDs will inevitably replace platter based hard drives. Unfortunately, limited quantities of expensive NAND and controllers are one aspect preventing that from happening. The second obstacle is that SSDs just aren’t available in large enough capacities to satisfy consumers. The only way that Intel prediction comes to fruition is if Intel takes the lead by pushing costs down and capacities up. While the SSD industry continues to trudge at a snail’s pace, 1TB and 2TB hard drives remain the popular consumer choice for both amount of storage and performance. Today, we’re looking at two of the fastest from Western Digital: The 1TB Velociraptor and the 2TB Black. 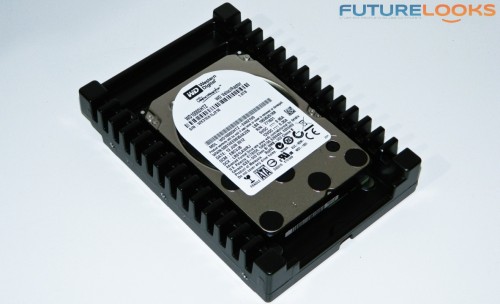 At first glance, the Velociraptor looks just as big as any other regular hard drive. But the actual size of the hard drive is smaller than the connected composite adapter, or IcePack mounting frame. The black Velociraptor-adapter almost looks like a giant heat sink which would have been kind of cool, but it doesn’t exactly transfer heat like a heat sink. It’s actually there more as an adapter allowing this thick 2.5 inch drive to fit into a standard 3.5″ hard drive bay. Closer inspection reveals that the adapter is hard wired to the drive and can’t be removed.

Since many enclosures hide hard drives, it’s almost a shame that the Icepack doesn’t come in color options. Something like this would make it really stand out in a crowd. 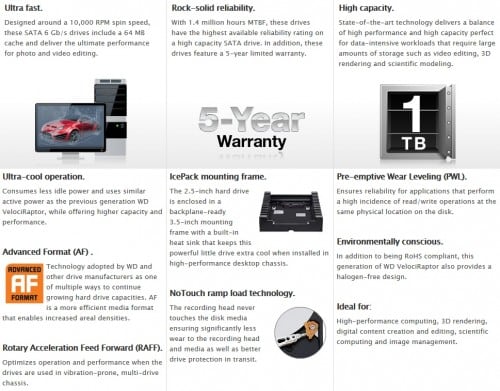 When looking over engineering attributes, my favorite feature WD hard drives offer is the No-Touch ramp load technology. Basically, the recording head never touches the platter which cuts way down on head and platter wear. Naturally, the motor of course plays a significant roll. It’s these two components that make or break the reliability of any hard drive.

With high quality materials used to assemble each and every drive, each HDD should live up to their 5 year warranty. 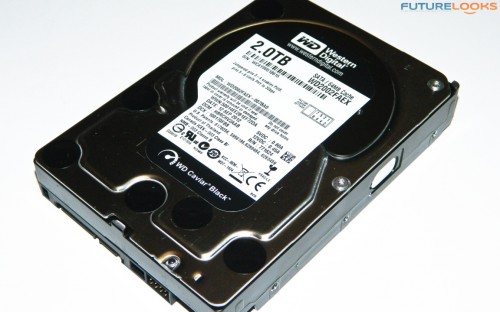 When it comes to storage, size matters. The older generation WD 2TB I have in my media server has been an excellent and quiet work horse serving a few different game and media HTPCs. If the revised 2TB Black WD2002FAEX model is of the same stock, then it too should be super quiet as well as offering a decent amount of speed too.

Engineering wise, my previous generation WD Black 2TB (WD2001FASS) of 3 years (going on 4) utilized an LSI controller which is not a bad option at all. The new drive hides the controller away on a much more discreet mini PCB board. One of the neatest saving graces about any platter drive that simply stops responding is that the little board can be swapped out with a new one and often work enough to get data off.

However, if your HDD is making a racket when it decides to go out, it’ll need more than that to rescue the data trapped on it. But so far so good with my long term live in tester and the new features of this latest revision should extend life even further. 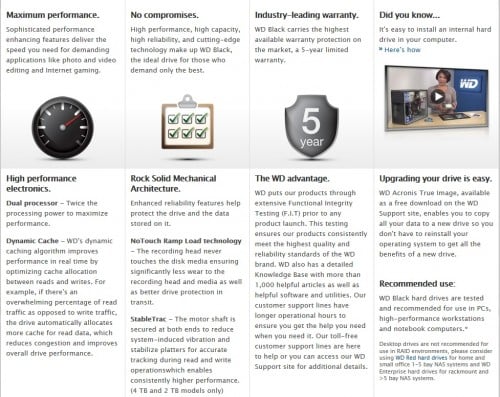 Again, wear leveling is minimized by the NoTouch Ramp Load technology. Its design eliminates vibrations which I can personally vouch for that it works. During preliminary inspection, the WD Black was extremely cool to the touch, which had me occasionally wondering if the drive was operating at all.

In terms of value adds, Acronis Software is included in the retail boxed SKU which is super handy for imaging over your existing hard drive to the new WD Black hard drive. This means, there is no need to reinstall Windows which is just fine assuming your current drive is problem free to begin with. If it’s starting to fail, then this won’t help you avoid catastrophe anyway.