This time we will put the GIGABYTE G1.Sniper A88X gaming motherboard in its natural environment, which is playing 3D games. Using the 3DMark Fire Strike test to push the boundaries of the GTX 770, lets see if the G1.Sniper A88x will keep up or fall behind. 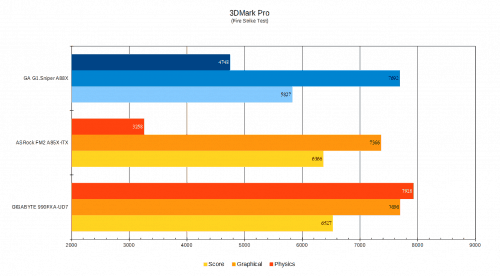 The results here puzzle me a little as things do not seem to add up. First, the GIGABYTE 990FXA-UD7 with the FX-8350 CPU clearly has an advantage in the physics test with 4 additional cores. The G1.Sniper A88x falls in line with right at 50% performance in this test, with the ASRock board lagging behind. Graphical performance of the G1.Sniper A88X comes in right under the 990FXA-UD7 and 330 points higher than the ASRock board. However, the overall score given is the lowest for the G1.Sniper A88X.

This is a very curious result, so lets all just jump right into the real world gaming performance tests to see if this was just a fluke.

The GIGABYTE G1.Sniper A88X should have a solid showing here if the previous tests are any indications. In fact, we should expect better performance from the G1.Sniper A88X than the ASRock A85X. I tested all three boards here in Battlefield 4 (full 64 map server) at 1920 x 1080 resolution and the settings on Ultra (motion blur disabled). The Metro:Last Light test was done with the same maxed graphics, no motion blur, with the same resolution. 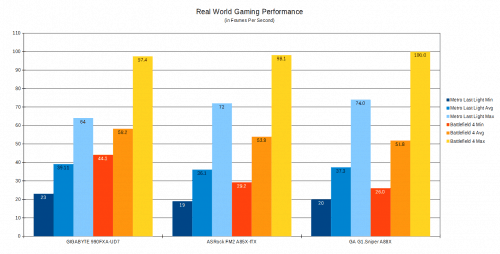 AMD’s point about processing power being in the background is once again proven here. With all other things being the same, performance on the three tested systems are virtually identical, with little variation where it matters, and that’s average FPS. There is more to the story here, but it all relates to physics and processing power, not motherboard performance. We will simply leave you with the results and test something more motherboard specific in the I/O performance areas next.

Now we get down to pure motherboard performance tests with I/O, starting with the SATA 6 Gbps ports. While SSD prices have reached an all time low, we will include HDD speed tests as well. Lets see what the G1.Sniper A88X can do. 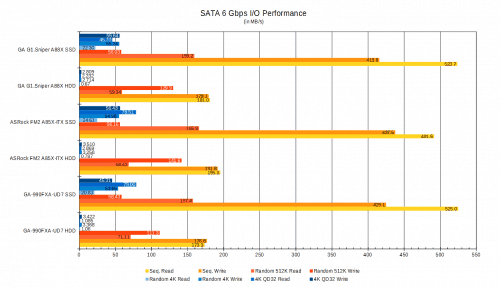 None of the boards here seem to have a clear advantage as they all take first in a few different test. The G1.Sniper A88X is the most consistent as it comes in second in almost every test. The only time it seems to fall into last place, is the Random 512K read for standard HDD and Random 4k 32 queue depth reads on an SSD. The latter of which concerns me slightly due to the sudden drop in performance by almost 50% in one of the tests. I repeated the test several times and got the same results. Peculiar.

The performance of the USB 2.0 port is more and more obsolete with USB 3.0 quickly becoming the standard. For the most part, USB 2.0 ports just need to be quick enough to transmit keyboard and mice inputs. If you still use a USB 2.0 thumb drive, memory card reader, or some other external storage, then it’s worth a look. This was done using a 16 GB Corsair Voyager thumb drive with no special software installed. 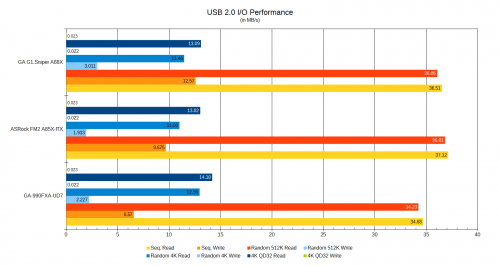 This test truly seems to favor the G1.Sniper A88X with it taking a commanding 3 MB/s lead in sequential write test. It also comes in second in every other test for the USB 2.0 performance. The AMD Bolton-D4 clearly has not forgotten USB 2.0 as tweaking seems to has been done in this area.

Next up is performance for what most of us have switched to for external storage.

This test is no different than the previous two I/O tests, but focused on the USB 3.0 performance. This is still done using a Rosewill External enclosure housing a WD 10k RPM 1TB Black HDD. What we are looking for here is the performance of the drive not being hindered and coming close to the SATA 6 HDD results. 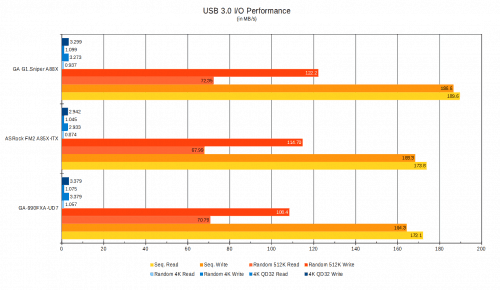 This is one test the results show the G1.Sniper A88X taking a 100% victory. It out performanced its competition in every single test and even outperforms itself when compared to the SATA 6Gbps results. This is a good sign and shows that AMD is also focusing more on USB 3.0 with their latest Bolton-D4 chipset. The GIGABYTE G1.Sniper A88X is definitely able to take advantage of this.

Now let’s get on with a few last tests, and take it home!