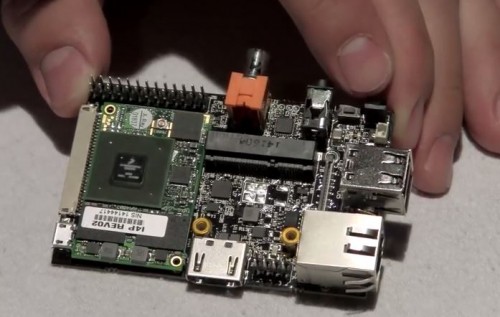 Readers of Futurelooks typically enjoying tinkering with their computers. As a member of the PC DIY community, you may have built your own PC, swapped out a few drives and even tried your hand at overclocking. If you’ve ever thought about playing with something on a smaller scale, the Raspberry Pi is likely the unit that comes to mind, but now there’s a more powerful option in just as small a form factor. It’s called the SolidRun HummingBoard and it’s quite the little beast.

Clearly targeting the Raspberry Pi market, the SolidRun HummingBoard has several advantages over its better-known counterpart. For instance, while the Raspberry Pi only has a single 700MHz core, the HummingBoard is clocked at 1GHz and is scalable to a dual core configuration. It also offers rich OS support, power USB port, a dedicated gigabit Ethernet port for networking, and coaxial S/PDIF output for audio. And you can still load it up with Android, Ubuntu or whatever else you had in mind to do whatever your heart desires.

The best part is that the HummingBoard from SolidRun starts at just $45 for the basic HummingBoard-i1. If you want a little more power, you can opt for the $75 HummingBoard-i2 or the $100 HummingBoard-12eX for up to 4 USB ports. You can order your HummingBoard now on Solid-Run.com. Happy Independence Day!