Search
Home
Reviews
Prev4 of 6Next 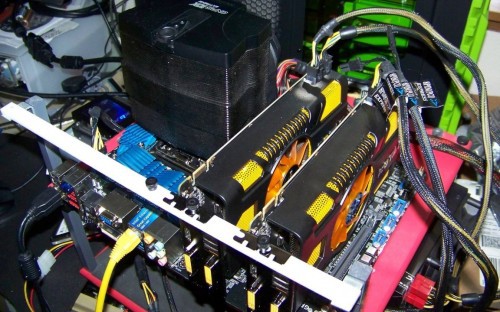 Let’s break down the test system and get straight to the benchmarks. We’ll be using a familiar Kingston V+100 SSD in our tests since running Intel Smart Response is what the INTEL Z68 chipset is made for.

Some Kingston HyperX Genesis and Patriot Division II memory was used to throw a couple variables at the Z68 round up both to validate and approve stability. The systems were all tested with a Kingston 64GB SSDNow V+100 connected since it is a standard Z68 feature. SSDs do enhance performance of the system through out. Keep that in mind if you’re comparing benchmarks.

The most serious issue encountered with the ASRock Z68 Extreme 4 is mostly a moot point now that boards ship with a newer BIOS. However, if you happen to get an older one, RAID set up needed for using ISR or SSD caching will give you issues at boot. The system may randomly not detect the OS hard drive and keep going back to BIOS. However, a quick BIOS update fixes any issues. Make sure you grab it before using this board.

As per standard operating procedures, the overclocked system has to pass three iterations of Sysmark 2007 or we don’t count it as stable. That said, the suite consists of programs that test the entire platform’s features and sub-systems under real world applications. The benchmarks include: Sysmark 2007, CineBench R11.5, 3DMark11, Metro 2033, RightMarkAudio Analyzer, input/output performance, power consumption, and quality control.

Power Consumption was measured using a power meter from the outlet. Quality Control was done utilizing both our senses and a laser thermometer. We’re looking for EMF, noises and any unusual hot spots compared to previous P67 platforms.

Overclocking: Who Brings the Frequencies?

When it comes to overclocking, the power supply, motherboard, CPU, and temps effect the results. If you can’t overclock very high, one of these variables will limit your system. With that in mind,  CPU voltage were set to a max of 1.5 volts and memory set to 1.68 volts for all overclocking. If you want to use the bundled OC software, you’ll find they all will reach 4.2GHz easily just like MSI’s OC Genie II on a 2600K. 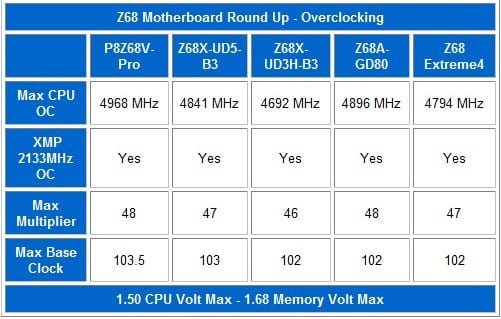 Switching to the BIOS, we found each board provides OC profiles topping out at 4.8GHz found on the Z68 Extreme 4. The P8Z68-V Pro and Extreme 4 achieved 4.6GHz presets out of the gate. The rest weren’t quite as aggressive with their preset profiles but still break the 4.2GHz barrier. When switching to full manual BIOS OC mode, the P8Z68-V Pro made excellent use of its offset DIGI+VRM voltages to lead the pack.

It makes sense that the boards with the more aggressive VRM overclock the best. You can also see that the Max Base Clocks weren’t very high. The higher you go with the CPU frequency, the less flexible the base clocks become. In comparison to the P67 boards we’ve had in the labs, each one randomly tested with the same voltage are a little more eager to squeeze out an extra multiplier and/or base clock frequency. 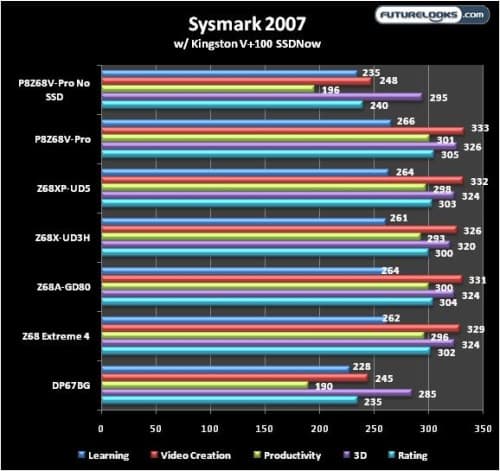 Sysmark 2007 is a data demon. It goes faster and faster thanks to the SSD and Intel Smart Response especially compared to the Z68 or P67 running without it. Keep in mind that it’s only with the help of a good quality 20-64GB max SSD that ISR makes such an impact. Repetitive games and programs will load quicker. But, you won’t see any decrease to your video rendering times or access when random data is involved.