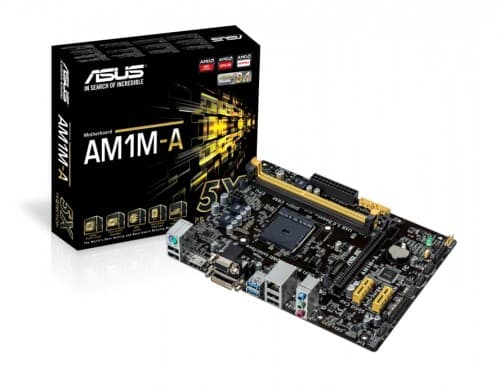 AMD recently announced they would begin selling low power use APUs using the “Jaguar” architecture. This is the same chip being used in your Xbox One and Playstation 4 consoles, so this is all kinda cool. These new SoC (System-on-a-Chip) will have their own socket AM1 and ASUS is the first to answer the call to arms with the new ASUS AM1M-A and AM1I-A motherboards.

As these new APUs are designed with a maximum power draw of 25W in mind, ASUS focuses on what something like that is best for. The new AM1M-A and AM1I-A are Micro-ATX and Mini-ITX respectively with all your basic needs such as HDMI output, 2 DIMM slots for up to 32 GB of RAM, Realtek Ethernet, and USB 3.0. You can also find the ASUS fingerprint all over the robust 5X protection, high quality caps, DIGI+ VRM, UEFI BIOS, and AI Suite 3.

The new ASUS AM1M-A and AM1I-A may not be the core of your next gaming PC, but it has the soul of one. Keeping quality were it is needed most, the power management system, ASUS will keep cost down and system reliability up. This is the perfect way to start your family PC, HTPC, or small home server. The AM1M-A and AM1I-A will be available early April. No word of pricing just yet.

With low power consumption and excellent graphics performance, the AM1M-A and AM1I-A are great-value choices for desktops and home-theater PCs (HTPCs).

The AM1M-A and AM1I-A have been engineered to the highest standards and are packed with a host of ASUS exclusive features:

USB 3.0 Boost with UASP Mode accelerates the already-fast speed of USB 3.0, intelligently optimizing transfer commands so that more data can be sent and received in shorter times than is possible with other motherboards.

These new motherboards also include ASUS’ award winning UEFI BIOS that presents a friendly graphical interface, allowing users to set up shortcuts and favorites for quick access to the options that are used most often. They also benefit from AI Suite 3 software, an exclusive ASUS dashboard-style control panel that lets users fine-tune almost every aspect of an AM1M-A- or AM1I-A-based system for the best balance between performance, stability and efficiency — all via a simple and intuitive interface.

The ASUS AM1M-A and AM1I-A will be available in early April. Please contact your local ASUS representative for further information. 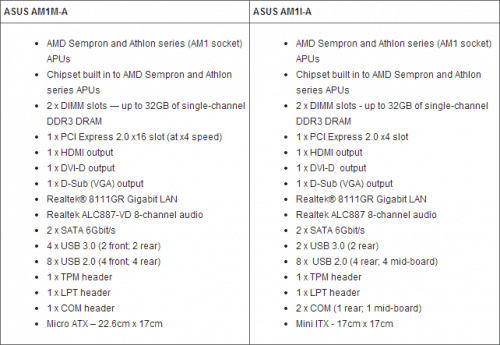