At CES 2019, the world of PC Gaming got a little bit more crowded as all the big brands have new products to showcase. ASUS is one company who keeps coming out with new products and this time it is two new gaming keyboards branded under their TUF and ROG sub-brands. They are called the ASUS TUF Gaming K7 and the ASUS ROG Strix CTRL.

First up is the ASUS Republic of Gamers (ROG) Strix CTRL mechanical keyboard. They have incorporated an oversized Ctrl key (hence the name) that allows you to easily reach it for those times where your key bindings are set to crouch, walk, dock or lie prone. With the larger Ctrl key, they also added two stabilizers to ensure that when you hit the key, it is registered instantly. As with other quality made mechanical keyboards, the ROG Strix CTRL has easy-to-access media keys and of course the beautiful per-key RGB LEDs with the support of ASUS’ Aura Sync customization. Did we mention that the right side Windows key was removed? No need to disable it or forget to disable it, the ROG Strix CTRL has had it removed. No more accidentally bringing up that annoying Windows start menu in the middle of gameplay. The left Windows key is still there but they made it smaller and less prone to accidental keystrokes, but of course, you can also disable it if you truly need to.

The ROG Strix CTRL supports customization with the Armoury II software. Armoury II allows you to remap key bindings, record, adjust and save macros easily. The Alt key is labeled “Macro” so that you can create them on-the-fly if need be. The ROG Strix CTRL has enough memory to store one default profile along with 5 customized configurations so if you take the keyboard to a LAN party and use another machine, your keybindings and macros follow without having to install software or rely on the “Cloud”.

The ASUS ROG Strix CTRL mechanical keyboard has a sturdy chassis with a brushed metal finish across the right side blending into an all-black body. Included with the ROG Strix CTRL keyboard are four silver caps for the WASD keys. It’ll come in your choice of Cherry MX Red, Brown, Blue, Black Speed Silver, and Silent Red switches.

A side bonus for those who might be up to no good on their computer or the Internet, in general, is that the F12 key is a “stealth” key. You press the F12 key and all running apps will be hidden and audio will be minimized. Just in case someone walks in when you are *ahem* looking at things you probably should not be.

How does a company improve on a mechanical keyboard? They look to using other technologies that can make the keystroke registration even faster. ASUS and their The Ultimate Force (TUF) Gaming K7 keyboard makes use of TUF Optical-Mech switches. These optical mechanical switches are becoming more popular in eSports and high-end competitive gaming. Instead of the mechanical key using two metal piece which comes in contact send the signal to the computer, the TUF Optical-Mech switches utilize a beam of infrared light in the switch’s housing. The switch interrupts the beam of light and triggers actuation. Metal contact points have a 5ms debounce delay to ensure a single key pressed isn’t registered multiple times, but the optical design actuates faster at roughly 0.2ms. The TUF Gaming K7 has two choices of Optical-Mech switches to choose from, the linear type and of course the more clicky and tactile type for those who like that. Even the point of actuation is lessened to 1.5mm of travel based on the 2mm of regular mechanical switches.

The TUF Gaming K7 has a floating keycap design built upon a matte aircraft-grade aluminum top plate. This frame-less, no bulky bezel gives it the TUF gaming look. The TUF Gaming logo is in the upper-right corner and is made of iron. A black leatherette wrist rest with memory foam is included. The wrist rest can pop on and off easily thanks to the magnets that secure it. Remember how we mentioned that the top plate is made from aircraft-grade aluminum? Well, it isn’t just for the sexy look, but it has a practical side too. The TUF Gaming K7 has an IP-56 rating to be water and dust resistant. You can spill your energy drink to your heart’s content or crush crumbs and you can keep gaming without missing a keystroke!

Due to the construction of the Optical-Mech switches, they themselves are resistant to damage from moisture as they have no metal parts. The PCB is even nano-coated to protect against oxidation too. 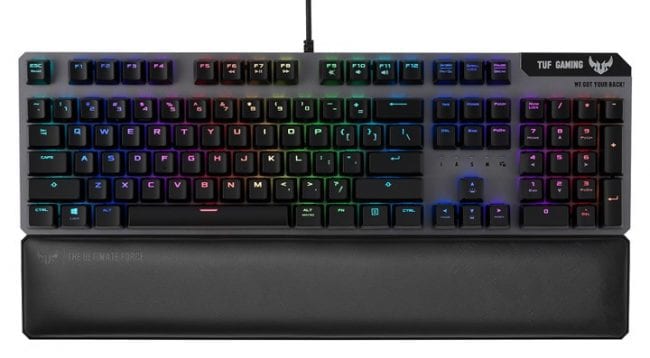 The ASUS TUF Gaming K7 also supports ASUS’ Aura Sync with the per-key RGB lighting which can be controlled with the Armoury II software. With the support of Aura Sync, the TUF Gaming K7 can participate in the ROG gaming light show. With 16 million colors literally at your fingertips, you can customize the look and feel of the TUF Gaming K7 keyboard.

The ASUS ROG Strix CTRL and ASUS TUF Gaming K7 are expected to be available this January 2019. No MSRP has been announced as of this posting.