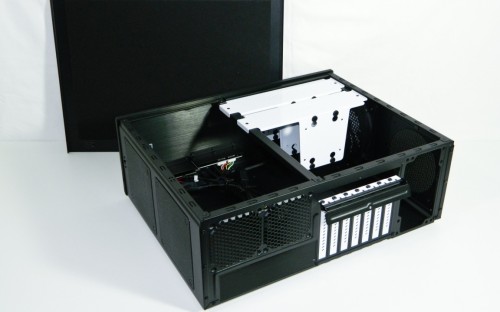 As mentioned earlier, the NODE 605 has as single lid rather than full shell like many other HTPC enclosures. Just a few screws later, it lifts off. Once inside, the birds eye view reveals two white removable “hanging” HDD/SSD trays. There are rubber grommets to limit HDD vibration installed in each one. Four small holes accommodate an SSD on each side. The interior is otherwise pretty simple and uncomplicated for getting set up and seems to provide a good amount of room for cable management. 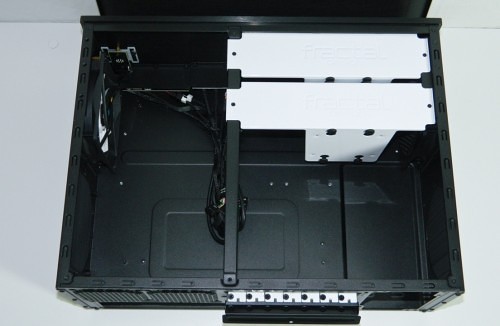 It’s pretty easy to cool these kinds of enclosures. Two 120mm fans come mounted in two of the front four available vents with filters installed. There are also two rear 80mm fan mounting positions as well. These ports are typically not nearly as effective as the 120mm cross cooling, or a wind tunnel. However, it is possible to redirect the 80mm fan(s) to blow cool air directly on to your CPU cooler if noise and/or temps are an issue. You may have to change the orientation of your CPU cooler fans to make this effective. 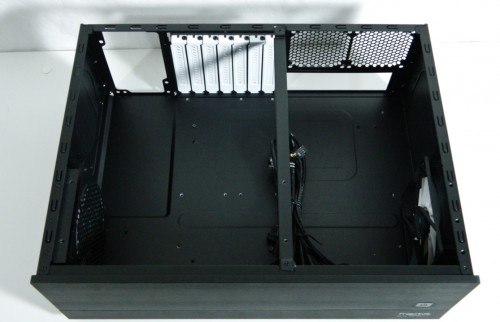 When I see a new case design, I like to examine how well the features function and how efficient the air flows throughout the case. This is done using my loudest and hottest system which includes an AMD Phenom II X6 1100T, ASUS M4A89GTD PRO/USB3 motherboard, Corsair Dominator 4GB 1600MHz DDR3 memory, NVIDIA 8800GTX Ultra, Antec 1000 Watt High Current Pro Platinum power supply and Seagate 500GB SATA2 hard drive. Since many of us build our HTPCs from whatever is leftover, the parts give us both a worst case plus real world test scenario.

For temperature monitoring, four sensors connected to the NZXT Sentry LX were attached to the side of a stock AMD CPU cooler, Southbridge PCH (chipset), and center most back PCB of each video card. Temps and system noise were monitored with the fans off, low, medium, and high. Both Prime95 and Furmark were used to fully load the system so that all the important components would heat up. 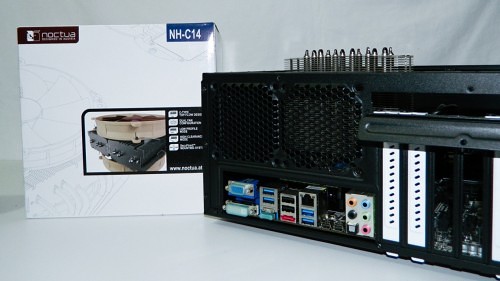 Full size ATX motherboards will obviously fit. However, CPU tower coolers over 5.5 inches tall won’t fit which includes most of today’s top performing coolers. Users will have to stick with the stock (albeit often loud) CPU coolers or move into one of the high end horizontal coolers available on the market. We recently reviewed the Noctua NH-C14 horizontal CPU cooler and it’s quite excellent, but an all in one liquid cooling system like the ASETEK 510 to 570LC,  Corsair H40 to H80i, or the Thermaltake Water 2.0 Pro and Performer would also be good options as well.

Dual radiators unfortunately do not appear to fit because you need some place to mount the hard drives and/or SSDs too. 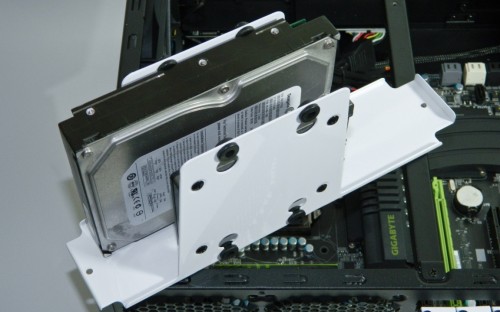 SSDs attach straight to the inside of the white storage tray via black screws that Fractal provides. There’s no need for grommets because SSDs don’t make noise or vibrate. Hard drives mount with screws also provided in the accessory baggy. If you’re planning to add your own DVD drive, make sure you use an ITX or micro-ATX motherboard to allow for more space to work with. 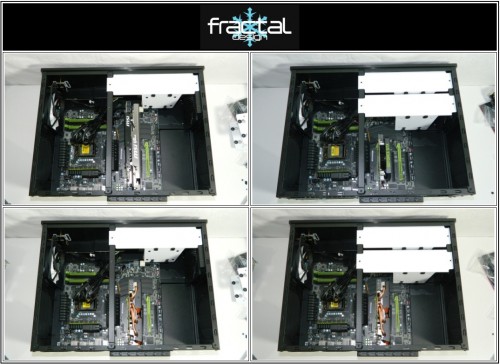 Finally, you have about 7.375 inches to the first white tray and 10 inches to the second white tray. The NVIDIA 8800 GTX Ultra (10.5 inches) wouldn’t fit unless all the trays are removed. The bottom line is you don’t want to utilize video cards longer than a GTX 560 Ti. However, there is just enough room that you could install both hard drive hangers and install just an SSD in the one hanging over the video card.

For the best possible results, use a GTX 660 or GTX 660Ti if you require both storage trays for full sized hard drives. Both cards are fairly short, but if graphics power is less of a concern, even the NVIDIA Geforce GTX 650 Ti would be a great fit and it’s VERY short.

Now that we have a well put together system with some challenging parts, let’s measure the thermal and noise level performance and take this review home.