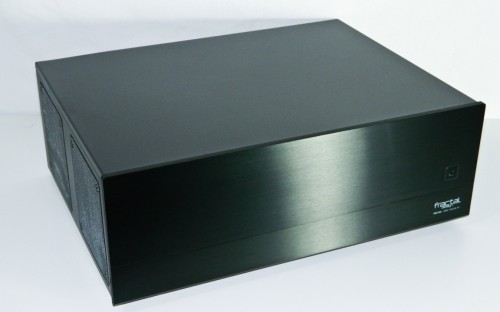 Recently, we took a very close look at Fractal Design’s Define R4. It was a surprising experience, providing a combination of both innovative and simple tried-and-true design features. As we mentioned in that review, Fractal Design takes a “less is more” approach to what goes in to designing enclosures. However, two things home theatre PC (HTPC) enclosures must have is an overall smaller chassis and both functionality and a pleasing aesthetic. We wanted to know if the new NODE 605 HTPC enclosure offers everything that consumers want. Does it have the right features and is it good enough for your media cabinet?

There hasn’t been a worthy HTPC enclosure to talk about for some time so please join us for a look at the Swedish engineered Fractal Design NODE 605 enclosure. Let’s see if this is cinematic bliss or merely amateur art.

If you weren’t already aware, many of the features are standard amongst Fractal’s designs. They like logical and attractive sprinkled with the noise dampening “Bitumen” material. In some cases, the material blocks quite a bit of noise caused by noisy coolers and fans. We’ve summarized some of the more noteworthy features below… 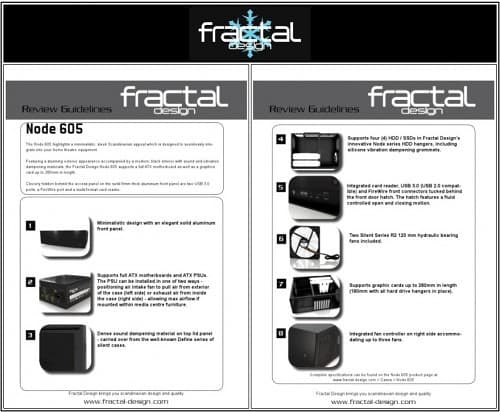 The NODE 605 chassis is as compact as designers could make it which means you’ll have to pick and choose your video cards carefully. Many HTPC systems can get by just using today’s Intel and AMD CPU integrated graphics processors if gaming is not a concern. This is more than enough to power a several 2TB+ drive storage solution.

If you want the system for more than playing back videos and music, a video card such as a GTX 660 Ti will fit nicely with one drive bay installed. Otherwise, a GTX 650 Ti will fit without removing anything. A standard PSU will  fit without issue. This deserves a section of its own so we’ll cover that in our installation notes in more detail.

MSRP of the Fractal Design NODE 605 hits the market in the $149 – $159 US price range. But the biggest question we need to answer is whether that pricing is justified. 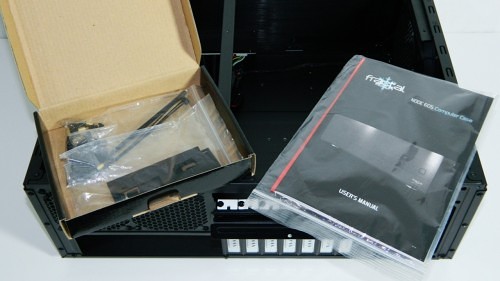 The NODE 605’s accessory payload is fairly standard for most enclosures, HTPC or otherwise. Inside the box you’ll get the installation manual, all your motherboard and hardware mounting screws, and even some zip ties. The manual is fairly well written with good diagrams and language that is clear and concise in the English language.

Unique in the payload are a set of slim 5.25 inch device mounting brackets that allow you to mount a slim optical device. As you’ll see from the front face plate, this is the only type of drive you can install internally and these brackets make it happen. However, you will need the proper power adapter to get a standard SATA power connector to attach to one internally so make sure you source one of those too if you decide to add an optical drive.

I broke down the case inspection into subsections in order to properly itemize the most unique features. It should be easier to digest plus it should help you decide if the enclosure fits your particular needs immediately. 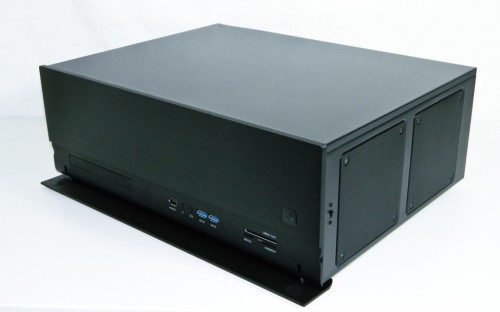 The front is made out of a finely brushed black aluminum face plate. The important thing is that it blends very well with the rest of the chassis which is made out of steel. Other than a single LED lit power button, a small front door opens to reveal the front panel USB, audio, FireWire and card reader slots. 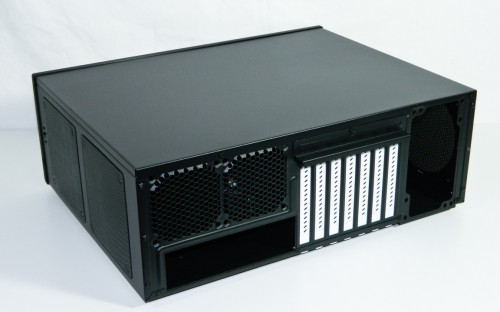 The chassis has a seamless appearance since the top is one solid piece which fits nicely against the front. A lot of eyes see this so it has to look good. There are four finely machined 120mm fan vents on the left and right sides where two of the included Silent R2 fans are mounted. The back of the chassis is pretty simple sporting Fractal’s signature white PCI slot covers and two additional 80mm fan vents.

Let’s move on to a look at the interior to see what we can actually fit in this chassis.