The enclosure was was tested in its stock, factory fan configuration and my own DIY user preference where the fans were moved to the port closest to the system itself. This will hopefully answer the logical configuration questions you might have. 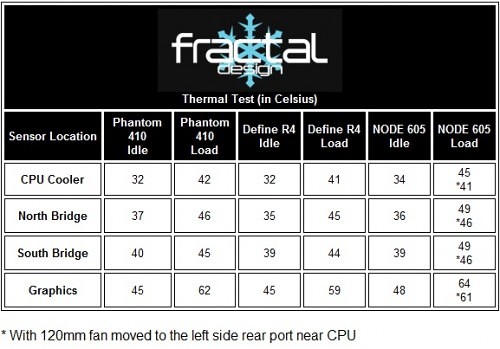 As you can see, the NODE 605 helps manage temps decently given the extreme heat this system generates. However, the cool air isn’t directly hitting the system in the default configuration. Moving the right side 120mm fan to the side rear port improves cooling. Adding 80mm fans to the back or moving the left side 120mm fan back had no measurable affect on temps. But moving the fans did impact system noise. Let’s check that out next.

To see how much noise the NODE 605 blocks, noise was monitored with the system idle and loaded down with tasks again and again. An average noise reading was recorded. Keep in mind that the test system is not the ideal system for this chassis. HTPC users typically choose better components to keep noise down. 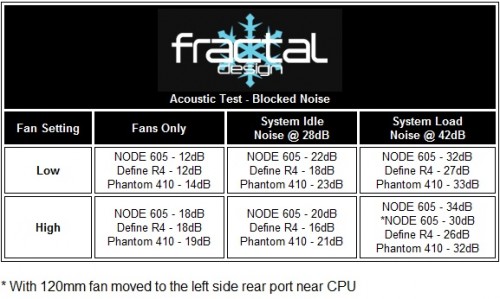 As you can see, the NODE 605 doesn’t exactly block a lot of noise but the air flow is optimal for shutting the stock cooler fans right up. Again, HTPC users will likely select quieter components in an effort to minimize distracting noise during movies and music playback. In fact, replacing the stock CPU cooler with a Noctua NH-C14 and GTX 8800 Ultra with an EVGA GTX 660 made the system quieter than the ambient noise in the room so we highly recommend that at least these two updates be made. 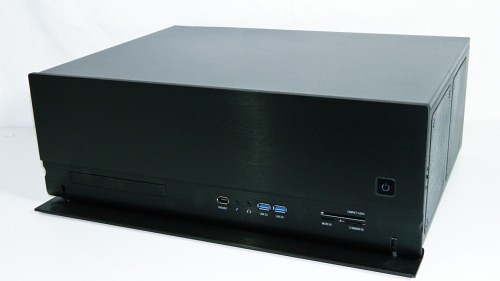 Evaluating Fractal Design’s NODE 605 enclosure has been a surprisingly simple albeit technical experience. It offers just the right features needed to be functional from the latest front panel IO features to the sound dampening material used within. Users have the option of installing a maximum of four 3.5 inch storage drives. That’s enough for an SSD for their operating system and three large capacity storage hard drives. Unfortunately, that’s also the limitation most compact HTPC enclosures face. This is when we would recommend external storage options like the RAIDAGE GAGE104U40SL-SAUF 1U 4 Bay RAID Enclosure or other external storage array might come in very handy.

In terms of cooling, the potential is there for creating a very quiet HTPC despite the default fan configuration. Thanks to the sound dampening in the case, noise is fairly well minimized with our selection of components. While the stock configuration doesn’t quite manage the hot spots, it’s the safest configuration as some motherboards may have CPU sockets a little too close to the edge which can conflict with the 120mm cooling fans. My professional advice is, if you have the space and can move the fan over without causing issue, is to make sure you do this. It’ll help keep that CPU cooler as quiet as possible and help with temperatures.

Obviously, the NODE 605 is a very attractive HTPC enclosure that will probably have visitors wondering what exactly you have inside your media center cabinet. But what will this pretty face cost you? Currently, the NODE 605 can be found for about $159.99 from places like Amazon, Newegg, or NCIX. It’s comparably priced to the competition but does offer some features that others do not, but presents it in a tasteful and stylish look.

Based on all of the strong points and value, we’re giving the Fractal Design NODE 605 one of our coveted Recommended Awards.