I’ve handled many a RAID enclosure over the last couple of years. After seeing many of the same features, they all start to look the same; you start to feel that if you’ve seen one, you’ve seen them all. If it weren’t for the different shapes, colors, and themes, that would probably be true. 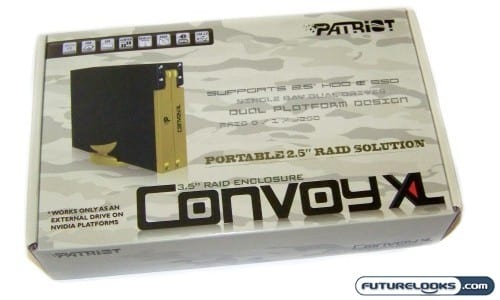 With Solid State Drives increasing in numbers, it only makes sense that we should see RAID enclosures built for SSDs. If one SSD is good, then two should be even better. Patriot Memory decided that they would do something different by introducing their own RAID enclosure specifically made to house SSD drives. By forging ahead on their own, they not only have control of the concept, but they don’t have to wait for someone else to do it. This effort is known as the Convoy XL.

Known by name as the Patriot Memory Convoy XL, the unit is also known in the retail world as the part number “PCXL25SR”. That doesn’t quite roll off the tongue quite as well as Convoy XL does. There’s also a regular pass through version called the PC25S which does nothing but hold your drives and connects internally only. No RAID. Naturally, the “XL” and “R” let you know you’re picking up the dual hot swappable 2.5″ SSD enclosure which supports RAID. Both of which slide into a regular 3.5 inch bay where your floppy drive used to go.

Speaking of RAID, the Convoy XL supports RAID 0, 1, and JBOD (just a bunch of drives). JBOD is always handy if you’re like me and only have a one of several different models of SSD. That way you can mix and match drive to get RAID performance out of your Solid State Drives if you can’t have matching pairs of drives, which is preferred.

What’s in the box

Checking out the box contents, you’ll find everything nicely packed. Among the contents are the main Convoy XL itself and a yellow ‘foot’ that clips on if you want to use your XL as an external storage solution. It’s another nice simple option if you don’t have another 3.5 inch bay (or 5.25 inch bay with 3.5 inch adapters) in your main desktop machine. 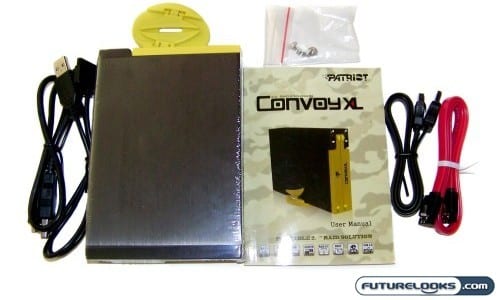 Also in the bundle are red and black data cables. You only need one of the data cables in order to get the XL online so you essentially have another extra cable for use on some other storage project. There is another USB data cable if you’d rather access the enclosure using that route. Of course, a black power cable is included to power the unit if it’s serving you in an external capacity.

The manual is pretty informative and covers using the enclosure in both an internal or external capacities right down to the placement of the yellow foot or more accurately, a stand. If you’re not quite sure what RAID configuration to choose, the manual even offers a basic explanation of each mode it supports.

It Could Be Internal or External

The Convoy XL actually a well fabricated enclosure. The housing is made from very nicely brushed black aluminum. If it weren’t for the holes on the sides, you’d think it was made to show off alongside your desktop rather than inside your system. Whether inside or out, it is a rather neat little piece of hardware. 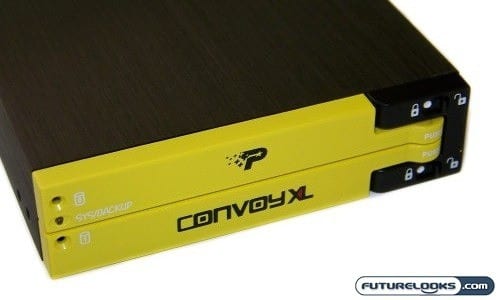 The front sports two yellow speed lock arms that make for quick hot swap access. Once opened, you can see the two internal SATA ports. It really is nice to see storage solutions and its supporting components slimming down and becoming more efficient in their use of space. A far cry from some of the “fatty” RAID solutions of old. 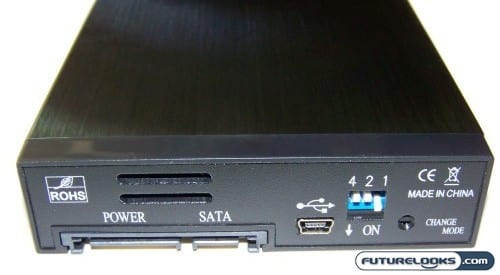 The back of the unit is all logical business. You can see the SATA power an