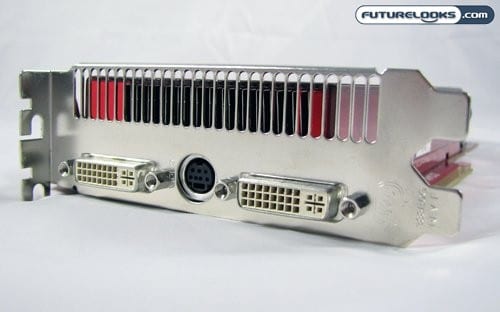 The rear of the card doesn’t hold any secrets or surprises when it comes to connection ports. Here we find two DVI ports, and video out port for the analogue composite and component video outputs. The card is fully HDCP compliant, so when combined with the included HDMI adaptor this card is able to be used to output an HD signal to any HDCP compliant HDTV or PC display. 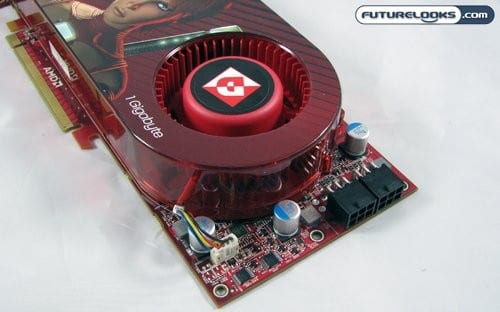 The card is powered by two 6-pin PCIe connectors, plugged into port on the rear edge of the card. The length of this card combined with the position of these ports may cause some problems for those with smaller cases, or cases with a unique configuration. Power stability is handled by the use of solid state Japanese capacitors. This should also help with getting the extra voltage needed for a stable overclock, should you want to push the card a little further than it already is. 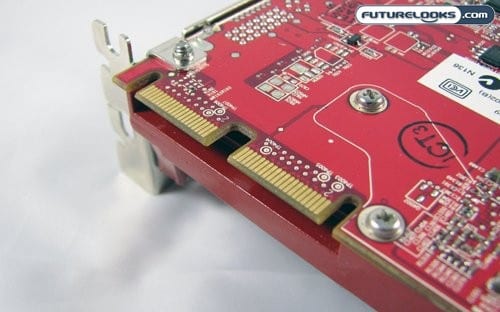 To test the DIAMOND 4890PE51GXOC Radeon HD 4890 video card, we installed it into the following test rig

We tossed the box drivers and used the latest drivers from ATI. Not only will we be comparing the DIAMOND card to the GIGABYTE card we reviewed a ways back, we will be setting them up in Crossfire to see what kind of performance boost you get. Since the GIGABYTE card has lower clocks then the DIAMOND, I also cranked up the clock speed so they match in Crossfire.

As for actual benchmarks we ran through a nice combination of synthetic and real world tests. We added a new benchmark to our suite of video card tests. Using the game Darkest of Days we’ll be able to test how turning on PhysX acceleration affects game performance. Otherwise we pretty well focused on gaming, trying to pick the most punishing titles in a particular genre.

We lead off with a dip into the old but still usable 3DMark 06 Pro, run at default settings. This DirectX 9 based benchmark suite tests the performance of video cards in all DX9 based features. 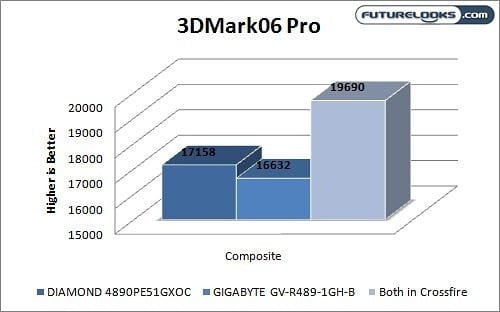 The DIAMOND card has an 8% speed advantage over the GIGABYTE card, but in our runs through this benchmark the DIAMOND card only produced a 3% jump in performance. I was hoping to see a bigger jump when moving to Crossfire, but it wasn’t to be so. 3DMark 06 performance only jumped an additional 12% with the cards in Crossfire.