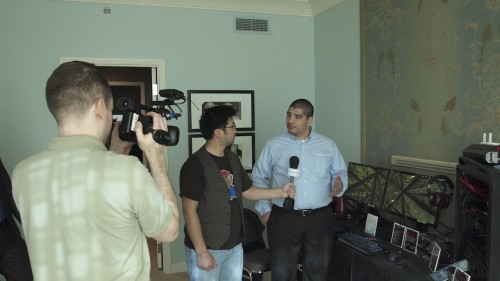 Happy New Year Everyone! Futurelooks kicks off 2013 with CES Coverage from Las Vegas!

This year, we’re doing our coverage a little differently. Instead of doing a zillion videos, we’re going to curate and pick only the best ones to compile into an episode. Each episode will be presented to you in glorious 1080p HD. In episode one, we visit with LaCie, bequiet!, Tt eSports/Thermaltake and ASUS. Sit back. Relax. And enjoy over 25 minutes of coverage in delicious 1080p!

LaCie – (00:50) – LaCie shows off three new products including a 5 bay RAID enclosure called the 5Big that provides Thunderbolt connectivity and a 5Big NAS product that provides both online and offline storage and cloud backup capability.

be quiet! (06:01) – be quiet! details their plans for invading North America. The German company details phase one of their landing and suggests that folks here will be getting some even better pricing than overseas.

Tt eSports (08:59) – Tt eSports is coming up with a few new headsets including one from their Chau Dracco line up. They are also announcing a new Team Edition keyboard an update to their Theron mouse, and a brand new mouse built for MMORPG players.

Thermaltake (12:32) – Thermaltake introduces a new line of CPU Air coolers that are less prone to hitting tall RAM modules and other motherboard components while maintaining high performance. They also update their Big Water 3.0 series with some upgrades. On the case side, they are launching their new Urban series of cases that provide users with a more elegant and business like solution that doesn’t sacrifice features or performance. On the gaming side, they have also introduce some elegance with a new Chaser line of cases.

ASUS (16:40) – Finally, ASUS unveils a new PCIe SSD solution called the RAIDR that will introduce a new level of compatibility and ease of use for enthusiasts. This is an unexpected new category for ASUS and we hope to have a test on it in the near future. They also unveiled a refresh to the 990FX platform for AMD and updates to mini ITX boards as well, but the real star was the new ARES dual HD 7970 graphics card which is fitted with a water cooling solution and fits in only 2 slots. Two new LCD panels were also announced with some unique features.

That’s it for our Episode One coverage of CES 2013. Stay glued to our Twitter and Facebook feed for updates from the show as we make our way to visit the companies you care about. Episode Two of our coverage will be out before you know it. In the meantime enjoy some of the product photos and candid shots from Episode One.