Left, right, up, down. Left, right, up, down. Left-hand shake, right-hand shake. You’ll find yourself developing your own “Dance Dance Revolution Hottest Party” mantra, in this fun to watch, fun to play game from Konami. If you’ve been locked up in a shell somewhere then you won’t know what I’m talking about. The swarms of crowds at the local mall arcades awaiting the next epic battle between two dancing foes. The slip-up from one competitor because the stabilizer dance bar just got too sweaty. This is a classic depiction of the infamous dance competition that will determine the swift footed champion, from the two left footed reject.

The “Dance Dance Revolution” genre has been available for console game systems for about six years now in North America with the first version coming out from Konami for the PSOne. So if you haven’t gotten your hands on a copy of this game yet, then read on for a brief preview of the already popular arcade game.

Do the Hokey-Pokey and Turn Yourself Around 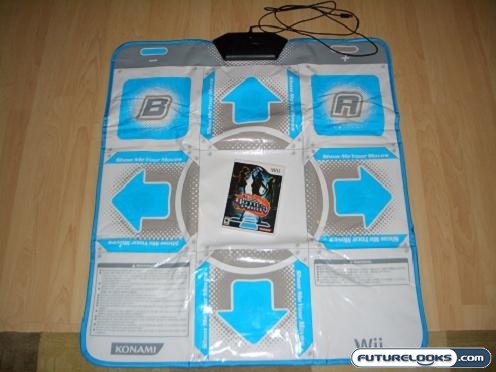 When you first reach inside the box you’ll find this portable, compact dance mat along with the game. If you were one of the many Wii-ers who expected leg strap-ons so that you can perform dances similar to the hokey-pokey, then you’ll be pleasantly disappointed. There are four ports for Gamecube controllers on the system itself for up to four controllers. Since the mat plugs into one of these four ports, it means that you can have a maximum of four dance mats for the Hottest Party on the block!

Firstly, the choreography of the anime dancers is flawless. Of course you expect this from programmers and graphic designers. So flawless in fact that no matter how much you actually suck at dancing, they’ll still dance exactly the same way! You take that in combination with the perfectly synchronized background dancers and you’ll find yourself watching a music video that could rival the best on your favourite music channel on the boob tube. 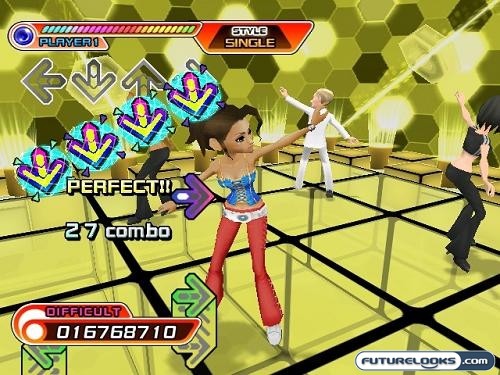 Secondly, some of the dance stages reminded me of the glowing stage that John Travolta (notice the ground-to sky pointing in the picture above) grooved on in Saturday Night Fever. Some of the stages could rival the colourfulness of the latest and greatest disco night clubs found in Asia. Whichever way you want to spin the dance floor, I was still unimpressed with the lack of uniqueness from venue-to-venue.

Thirdly, the best visual of all was watching your friends, family, and loved ones make a complete fool of themselves as they trip on their own feet trying to keep up with the damn arrows flying past your T.V screen. Another funny thing is when they don’t realize that a simple flick of the wrist will activate the hand triggers and instead they attempt a knockout style punch that could rival Mike Tyson’s left-right jab to the mid section.