Crank up the Tunes

There’s not much to say about the sound quality that comes from the game. The songs play as well as any high bit rate mp3 that you can play off your home computer. The music does get pretty up-beat when you really get into it, and a high quality stereo system will help ensure that the foot stomping is drowned out properly.

There isn’t a lack of variety of music in this game. The music selection varies from soul music all the way to some house/dance music that will get you sweating in no time. You’ll find yourself singing along to some familiar songs, but you may not recognize some of the artists. I sense that this game doesn’t actually have the full rights to the songs from some of the original artists, but you’ll find music from the 80’s, to 90’s, to the present day that should give you enough of a challenge to keep you busy. 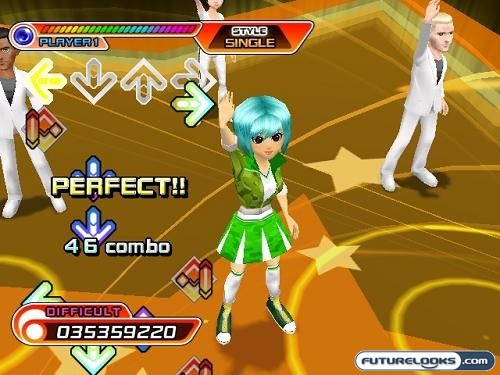 Alright, time for the meat and potatoes. Where to start? I’ll start with the music. Each song has a rating system called Beats Per Minute (BPM). This indicates how fast the foot stomping has to occur and usually the higher the BPM’s the more difficult the song. However, the BPM’s can differ within the same song from various skill levels. For example, one song when played in the beginner skill level had a BPM in the mid 80’s but once you select difficult or expert, the BPM’s jumps to well over 100. Also, I found that even though the BPM’s for some of the songs were pretty low; it was difficult for me to actually keep the beat, because the music in the background would actually subconsciously move my foot and step down somewhere. You’ll also find that one songs basic skill level was similar to another songs expert skill level.

The game does seem to be fairly easy when you’re on the beginner mode, but that’s for rhythmically challenged persons like me. Once you get the hang of it you actually look like a zombie taking small steps to conserve energy. Moving onto the basic skill level it gets somewhat more difficult with a few extra steps and movements where there wasn’t in the beginner mode, but I found that for some songs, it was much easier to dance in the basic skill level than the beginner. Moving onto the difficult level, you’ll find yourself having to stop in some areas because it’s too crazy and regrouping for the next massive combo your feet and hands have to master. For the next level I can’t even tell you how difficult it is, because I had “accidentally” chose expert for a high BPM song and before I even stepped on the pad I was GAME OVER! 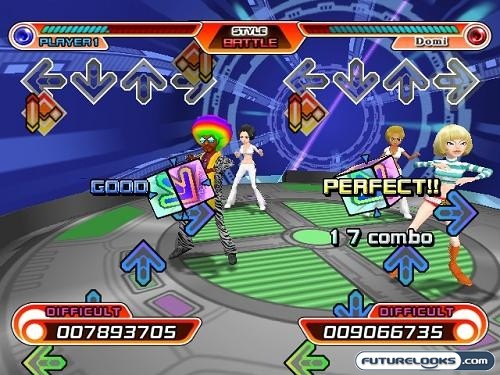 The single player mode is fairly challenging and there is a sense of re-playability for the single mode. I had finished the beginner/basic levels of the game, and then it calls for you to redo the competitions in the difficult/expert levels. I could tell you right now that if you found it difficult to master some of the basic levels, you’re not going to enjoy passing it with the expert level. But if you’re really into the game and your feet fly like the dickens then you’d enjoy battling the computer controlled dance masters, which you have to beat by obtaining a higher score while they send over gimmick arrows that could range from double-stomps, to foot destroyers. Now, it’d be cool if the dance mat actually destroyed your foot, but no luck there.

The game also has a Workout Mode. Basically you input a few minor details about yourself and dance till you reach a certain level. It’s actually a fairly good workout if you don’t have better things to do like play sports, or take a walk outside in the nice weather. But on a rainy day, it’ll make you sweat, especially if you perspire because you look like a fool!