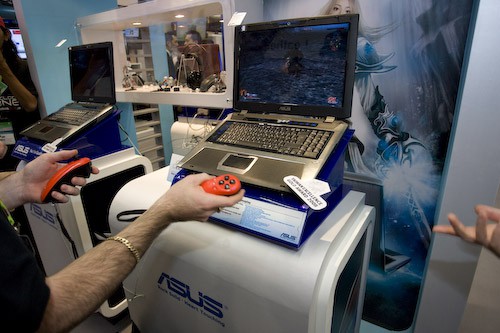 The biggest global brand in all of Taiwan is Asus. Manufacturing everything from motherboards to mobile phones, Asus has a rated brand value of over $1 billion. While a good portion of the North American public is only familiar with laptop brands like HP and Dell, Asus certainly has a lot to offer to the world in that segment of the market as well. Heading on over to the Asus booth at Computex, we were shown some of the latest and greatest notebooks that the company had to offer. It seems that they are focused on Montevina and the Eee PC.

By and large, there are two main types of notebook enthusiasts. On the one hand, you have the folks that want a reasonably sufficient machine in the most compact of form factors. These are the people that would go after laptops with screens no bigger than 12 or 13 inches. On the other hand, you have those who are more inclined to look for a desktop replacement. These are the folks that are willing to sacrifice portability for power. I think it’s pretty obvious which segment Asus is targetting with the Asus G71V. 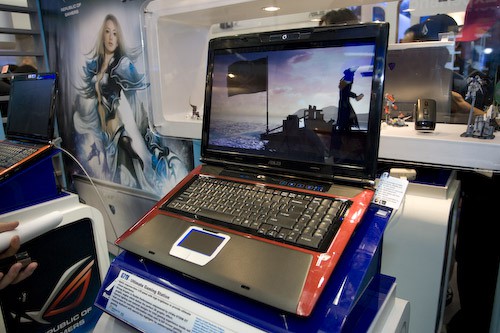 This monster of a laptop gets a large 17-inch widescreen display and it is being marketed as the ultimate gaming station. The LCD panel is said to boast a “quick response time” and “high brightness”, both of which are absolutely needed for an online session of Unreal Tournament. The big screen gets backed by the nVidia 9700M GT graphic engine, a gaming-centric keyboard with special key highlights (WASD), Intel Core 2 Duo processor, up to 8GB of DDR3-1066 RAM, dual SATA HDDs with support for RAID 0/1, and integrated CPU overclocking.

Rounding out the specs are a 4.1 (yeah, really) sound system, Dolby Home Theater, touch sensitive controls above the keyboard, secondary display for “real-time information when used in full screen gaming”, and an optional hybrid/digital TV tuner. I should also point out that the Asus G71V gaming laptop is meant to be a preview of the upcoming Intel Montevina platform. 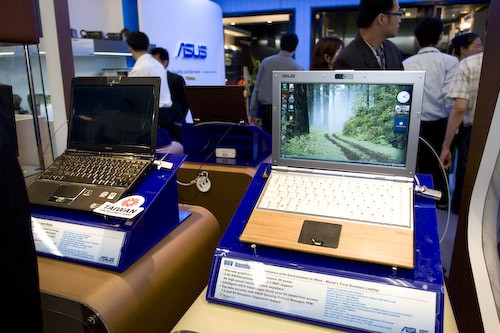 One of the themes of this year’s COMPUTEX Taipei is GreenIT. It seem like Asus is trying to do its part by producing the world’s first bamboo laptop. They’ve replaced the wrist rest area on this notebook with a sheet of bamboo; I guess bamboo is so plentiful that the husk probably would have gone to waste anyways if Asus didn’t decide to slap it onto this laptop.

In terms of specs, this 12.1-inch notebook still gets quite a bit of performance. It’s got discrete graphics from the nVidia GeForce 9400M G, optional 3.5G HSDPA connectivity, a biometric fingerprint reader, Intel Core 2 Duo processor, up to 4GB of DDR2-800 RAM, SATA HDD support for up to 320GB of storage, and an 8-in-1 card reader. Also, the VGA webcam can be used with the intelligent Asus SmartLogon facial scan technology. Don’t worry. Everything stays safe with all this “top data security” via the Asus Security Protect Manager.

The Asus U6V Bamboo (as well as its non-bamboo counterparts) is also a preview of the Intel Montevina platform.