A Twin Peak at the Two Procs

Comparing the older Phenom and newer Phenom II X4 processors side by side in CPU-Z, we get to see some of the differences that lay the groundwork for the benchmarks ahead. This may be a bit of a rehash for those who read our AMD Platform Showdown, but bear with me.

First and foremost is the 200MHz jump in speed when switching from the older CPU to the newer Phenom II X4 905e. This will help out in the few performance benchmarks we are going to do. As for the first tests we set out to do, the lower die size and lower voltage should help out. Multimedia testing should also see a bit of a boost from a more efficient core.

The first test in our battery of efficiency benchmarks is a simple run through with OCCT. This program can monitor and log CPU and chipset temperatures, as well as voltages. We basically used it to drive the AMD Phenom II X4 905e to 100% CPU usage, gauging how much of a difference in temperature the lower voltage and smaller core make. 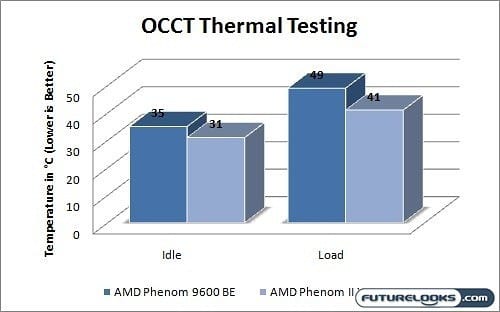 Idle temperatures weren’t that different, with only a 12% difference between the older core and our review unit. Placing load on the two processors made things a little more interesting. The 905e was 17% cooler under load then the older CPU, which is a good thing. The less heat the CPU dumps into the case, the better off your system will be in both stability and longevity.

Another area where the 905e is said to be ahead of the rest is in power consumption. To test this we used an UPM Blue Planet EM100 Energy Meter to monitor how many Watts the system was using, while running through a loop of 3DMark Vantage on Performance mode. We took our idle readings after letting the system sit for 30 minutes, which allows Windows Vista to settle down and stop doing things. 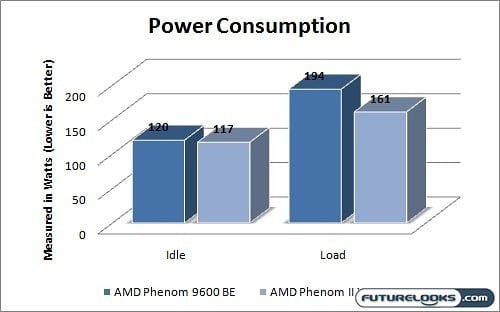 We found that at idle there wasn’t a significant difference between the processors, most likely due to the other hardware in the system. When we turned the dial up on performance the 905e did shine through, posting a 17% drop in power consumption while still posting a higher final score in 3DMark.

A Little Multi In Our Media

Our final test, before moving on to some performance benchmarks, is to simply see how the 905e handles HD playback when compared to the older CPU used in my HTPC. We tested CPU usage while playing back a 1080p h.264 video file of the Top Gear Polar Special. Of particular interest was the first couple minutes, as they are panning over a field of white snow with snow blowing over the surface. This scene has crushed most CPUs that aren’t quad core. 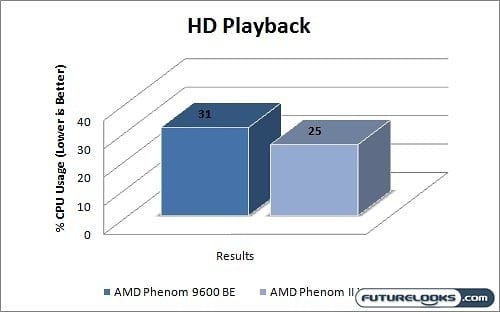 I’m happy to say that for a processor that only has an 8% boost in raw MHz, the Phenom II X4 905e used 19% less CPU resources playing back this video.