Before wrapping this up, we need to do a couple performance benchmarks to show that the Phenom II X4 905e does actually post significantly better performance number then the older CPU. No it can’t all be efficiency tests. Anyhow our first benchmark consists of a run through PCMark Vantage. For this benchmark you’ll notice that we’ve nearly picked the exact same scripts as our regular CPU reviews, adding Music to play to the HTPC theme. 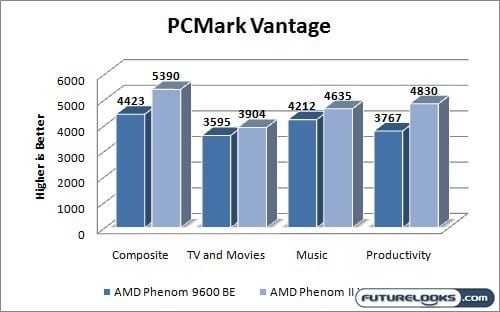 Overall the 905e posted an 18% performance boost in PCMark, but the breakdown of the scores is much more interesting. Productivity got the biggest boost, with the 905e posting a whopping 22% advantage over the older core. In direct contrast to our CPU usage test on the previous page, the TV & Movies benchmark was only 8% in the 905e favour. This scales perfectly only with the speed increase between the two processors, and doesn’t give any benefit to efficiency upgrades.

Music had similar results with only a 10% performance  increase. This isn’t necessarily a bad thing, as these two benchmarks rate performance in editing, converting, and playback of their representative mediums.

With those numbers in mind, I decided the final benchmark we could perform that would most appropriate with the HTPC theme is to see how long it would take for the 905e to re-encode and compress a DVD into a more manageable format. Our format of choice was video optimized for the iPod. This was selected due to the limitations in Nero Recode, one of the few multithreaded video encoding programs that actually uses the full resources of the CPU. 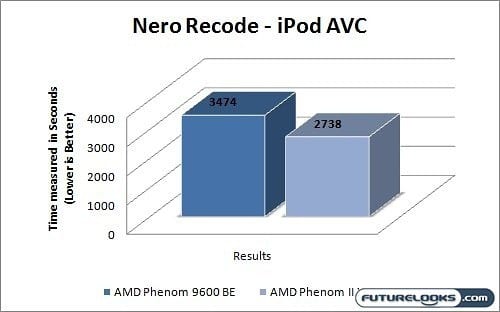 The 905e blew away it’s previous PCMark Vantage number in this area, posting a 21% advantage on the Phenom 9600. This was with full 2-pass encoding enabled, and compressing a DVD copy of Stargate to CD size. 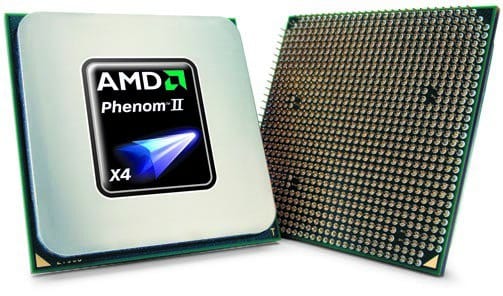 So what are we looking at after the dust is settled? On the one hand, the AMD Phenom II X4 905e seems like the perfect CPU for a home theatre PC or silent PC. It’s just as efficient as it’s 3GHz+ cousins, while running cooler and on less energy. This makes it more efficient than the original Phenom 9600 CPU I was using in my HTPC at the time of testing, but I think that was a given for the get go. The one thorn in the side of this processor is the price however the AMD Phenom/Phenom II platform itself provides value as any AM3 processor will drop in and upgrade your system on the spot without changing your motherboard and RAM. If AMD can make a chip this efficient, only time will tell what else they come up with as a drop in upgrade for AMD fans out there.

When one looks at the raw numbers, this CPU looks like it’s a bit too expensive. 2.5GHz processors are easy to come by and relatively cheap. The 905e requires explanation as to why it may be worth the dollar value placed on it. Requiring explanations like these tend to place products in a niche, which is where this CPU is headed. In looking around for a place that sells this CPU, I found Newegg had it deactivated. I only found a couple Canadian retailers who still had the 905e listed and in stock.

In the end, the AMD Phenom II X4 905e is a good product for a particular user. Earlier on I extolled the virtues of my HTPC, and why it was my favourite system build. Its purpose built, and it serves its purpose well. This CPU is the same way. It’s not the fastest in raw performance at its price point, but the intangibles are there waiting to be utilized. And hey, it’s still cheaper than the Intel part sporting the exact same specifications.

I would say that this is a recommended CPU for those looking to build a powerful HTPC or silent PC that strikes the perfect balance between cool, quiet operation and raw performance.