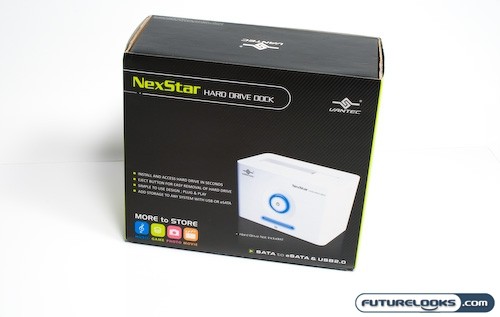 Back in April, I reviewed Thermaltake’s BlacX USB Hard Drive dock and heralded it as a step in the right direction, away from those boring hard drive enclosures out there. Although it was a cool concept, it lacked in the performance department due in part to the omission of something faster than your standard USB port. Vantec has come along with a new product called the NexStar eSata/USB Hard Drive Dock which sports not only lowly USB, but kicks up the performance with an eSATA port.

The Vantec NexStar Hard Drive Dock supports both 2.5 and 3.5 inch SATA I/II drives. That means, IDE need not apply. The USB 2.0 boasts transfer rates up to 480Mbps while the eSATA takes that right up to 3Gbps. As you can see, there is a potential pay off in speed here. The unit is made entirely of plastic and measures 136 x 83 x 87 mm so it should fit even in the tightest spaces. Out of the box, the unit supports both Mac OS 8.6 and above and almost all flavours of Windows from 98SE and above. It even supports Linux with Kernels 2.4.18 and above. Of course, you’ll need a USB 2.0 port to get the full USB experience, and an eSATA or SATA port for maximum performance. 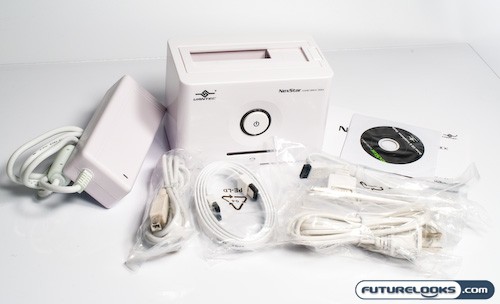 Vantec has a reputation of throwing absolutely everything you could possibly need into the box, and this is no different with the NexStar Hard Drive Dock. You get the dock itself of course, instruction manual, driver CD for those OSes that need drivers, power adapter and cord, USB Cable, eSATA Cable and an eSATA bracket just in case your motherboard doesn’t already have an eSATA port on the back panel.

I’ve found that a lot of enclosures and even off the shelf drives don’t include this missing piece of the puzzle even though they support eSATA. That’s really bizarre because it’s a cable you won’t find on the shelf at your local big box computer store so kudos to Vantec for taking care of the end user. 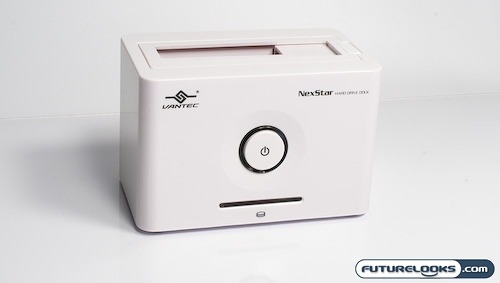 After pulling out the drive dock from the packaging, it felt really light to me. Compared to the brick that was the Thermaltake BlacX, this Vantec NexStar felt like a piece of styrofoam. Granted, the NexStar is definitely a lot prettier, but I usually like my gear with a bit of substance. Afterall, it’s not like you’re going to be carrying it around or anything. It would be a shame if someone came by and knocked it over while a drive was spinning inside.