The sale of platforms vs individual components have been things that both AMD and INTEL have played with. INTEL had some early success with their Centrino mobile platform, and caused such a stir amongst mobile users that people started to ask for “Centrino powered” laptops by name, regardless of how many other models and brands were available with the exact same functionality. A success that their Viiv platform never seemed to follow up with on the desktop.

AMD has tested the waters in the sea of platforms as well marketing their mobile configurations under the PUMA name. They matched Intel’s Centrino in purpose, but were much more relaxed in scope. What that meant was that their hardware requirements weren’t as strict for a system to earn a badge saying it was part of this or that platform. Unfortunately, no one asked for a PUMA like they did a Centrino. 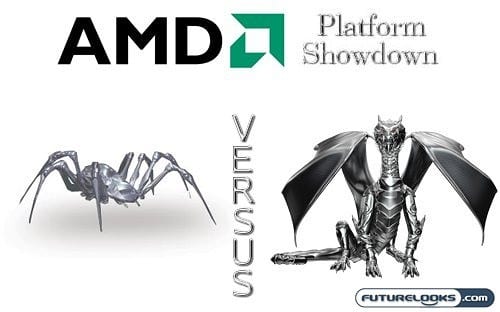 Lessons were learned and AMD has since set its sights on the performance desktop computing market with its latest platforms. Spider was their first platform launched back in late 2007. However, early benchmarks already doomed it to not really being a threat to Intel in terms of performance. Thus the hoopla was downplayed and the Spider entered the room quietly without anyone knowing it was there. Of course plenty of people tried to step on it because it was supposed to be the mythical Core Duo Killer. So the marketing message for Spider ended up being “Performance per watt”. That’s OK if you’re a lightbulb but not when you’re building a top end gaming system or workstation.

Earlier this year at CES 2009, AMD officially launched the new Dragon platform with a little more fanfare. They even put it in action at the Tiger Direct Charity PC Race at CES, where journalists raced to put systems together as quickly as possible. Dragon and now the recent Dragon spring refresh, are meant to provide a bonus to those who use certain components in their performance computing endeavours. It also provides a great value proposition for those of us that want to take their sweet time upgrading, offering both a DDR2 and a DDR3 upgrade path as well as more CPU options with common sockets. Not to mention, AMD has cleverly priced their systems to be great performers at an even better price compared to similarly equipped Intel builds. And so Dragon now is representative of their new platform slogan: Performance per dollar.

In order to understand this tough road that AMD took, we’re going to have a bit of an AMD Platform history lesson by taking you back to Spider and then bringing you up to speed on today’s brand new Dragon refresh (we’ll call it reloaded…much cooler) platform. We’re going to see how each of these platforms stack up against each other in a flurry of benchmarks. We aren’t so much out to find the performance king, as we are hoping to show what you’ll get for how much dough. Let’s introduce the contestants shall we? 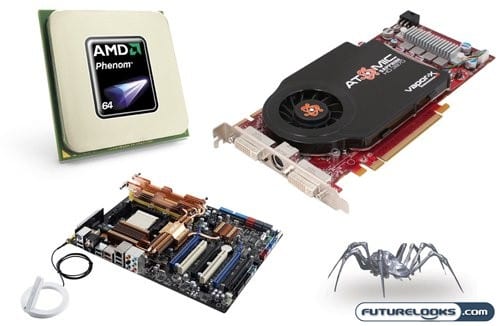 Spider was the first to the plate, and consisted of an AMD Phenom quad-core processor, ATI Radeon HD 3800 series video card, and AMD 7-series chipset based motherboard. Though it was a great boon for budget conscious gamers it couldn’t best Intel’s hardware at the time in performance. A system built around the Spider platform was maybe 85% to 90% the cost of a similar Intel based rig, but it only offered 85% to 90% of the performance. Though that does scale well, the margin was too narrow to draw in a lot of people from the Intel camp, and only just win over the afore mentioned budget gaming crowd. However, an AMD Spider Platform did offer some noteworthy power savings over an Intel build, which is why their marketing latched onto “Performance Per Watt”. 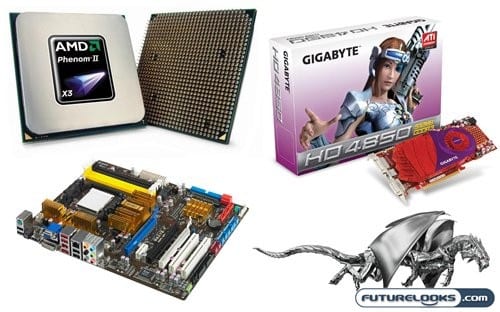 AMD went back to the drawing board in a way, and came back with the new Dragon platform to coincide with the release of their latest Phenom II line of processors. Though anything under the Dragon umbrella simply had to have an AMD Phenom II processor, ATI Radeon HD 4800 series graphics card, and an AMD 7-series chipset motherboard to qualify, the first Dragon out of the stables was the triple-core based platform. This configuration plays more to budget gamers who want to upgrade in the future, and those in the home theatre PC crowd. It also allowed you to take along your DDR2 RAM and existing CPU while taking advantage of the very excellent 4800 series GPUs.