For 2015, we’ve made a few tweaks in our GPU testing setup. Of particular note, we’ve jumped to Windows 8.1, since Windows 7 is now officially retired by Microsoft. At least on the mainstream support side.

Of course, all latest BIOS, firmware, and driver updates (at time of publishing) were applied to our platform.

The ZOTAC GTX 960 AMP! Edition was plugged in on several Intel Z97 based boards simply to eliminate any odd variables like firmware incompatibility, EMF, or EMI. The card performed admirably in each case. It’s also a quiet card if you’re wondering, thanks to the new Freeze Technology. More on that after looking at ZOTAC’s new overclocking utility, FireStorm, next! 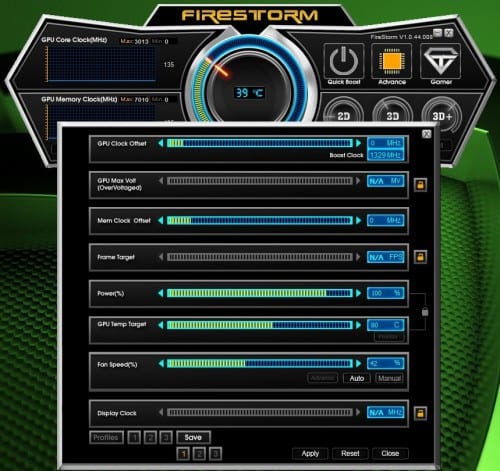 Firestorm debuted with the arrival of the ZOTAC GTX 980 AMP! and AMP! Extreme video cards. It had a bit of a rocky start, not working exactly as expected, out of the box. We had similar results not being able to get the Gamer mode to activate. Quick Boost and Advanced modes were fine which is enough to set an overclock.

That said, this sample card reached 90 Mhz more with 90% extra voltage applied. With max voltage, the card can just reach over 100 MHz extra GPU Clock. The ExoArmor cooler also seems to have a lot of headroom as well. 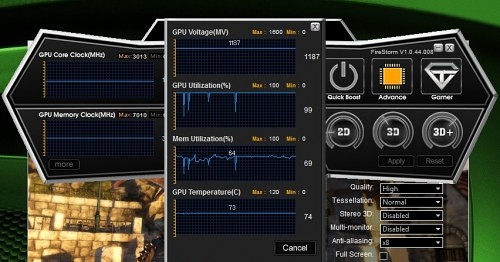 Fan noise and any electromagnetic frequency noise were both monitored during testing. At stock full load, the card was just audible in our open case, but undetectable when closed. As expected, during overclocking tests, the fans are much more noticeable (35dB) as they should be given the extra GPU voltage and heat. Note that this is without extra case fans blowing directly on the GPU.

The card produced a very slight detectable noise during stock full load tests. It created a bit more when overclocked. The noise isn’t detectable when inside a decent computer case. Still, we’d like to see the engineers eliminate any EMF in future cards.

Consumption was as almost right on the money at 120 Watts during the beatings, which is what ZOTAC has listed the specifications for on this card. That’s not too shabby at all. The question is, how does it perform? Let’s kick the answer off with two of our favourite synthetic benchmarks: 3DMark and Unigine 4.0. 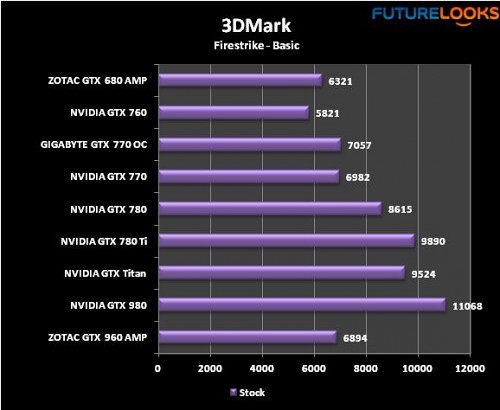 ZOTAC’s GTX 960 AMP! does quite well given its extra high overclocked frequencies. Keep in mind that the basic edition (Firestrike) is a freebie, so you can download and compare, with your own equipment. If your card is scoring much lower, it would explain why you’re graphics may be lagging in the latest games.

Note that, reference clocked GTX 960 cards will score about 300 points less as the ZOTAC GTX 960 AMP! edition has a higher clock speed out of the box. 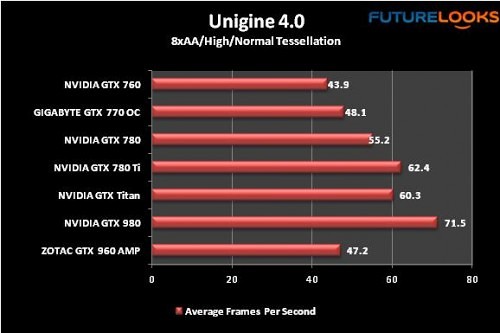 Unigine 4.0 (Heaven) benchmark is the closest thing to a high end realistic graphics stress test. The ZOTAC GTX 960 AMP! scores closely with the overclocked GIGABYTE GTX 770 OC card which is impressive. Especially since that card is still in a higher price point.

Now that we have an idea of how things will play out, synthetically, let’s take it to real world games.