The Kingston HyperX 120GB/240GB SSD is the current champion SATA3 SSD that earned our esteemed Editor’s Choice in our recent Round Up of SATA3 Sandforce Controller SSDs. Not only does it perform quite well in any basic configuration, but it also features the most extensive consumer friendly accessory bundle offered by anyone. The “Upgrade Kit” is intended to help you transform your current or new computer in to a high performance speed demon by providing you everything you need in the box. Check out the unboxing video above (or directly on YouTube) to see what you get. Then we’ll show you some performance numbers.

Shacking Up With a Pair of HyperX SSDs

In our SATA3 SSD round up, we showed you how just one of the sweet looking Kingston HyperX 120GB SSDs produced some impressive data transfer numbers that will more than satisfy the largest majority of users. However, some pro-users move a lot of data and multitask. Another SSD could help if configured in RAID. We took two HyperX 120GB SSDs and attached them in a RAID 0 configuration using a GIGABYTE GA-Z68XP-UD5 motherboard via the native Intel SATA3 ports. Here’s what we found out.

First, we wanted to see how the HyperX 120GB SSD handles the intense data compression that CrystalDiskMark uses to benchmark storage devices. The 4K and 4K QD32 small data block write performance is simply awesome. This means your system will be able to manage and create content far more efficiently than a standard four hard drive array. Let’s look at one more. 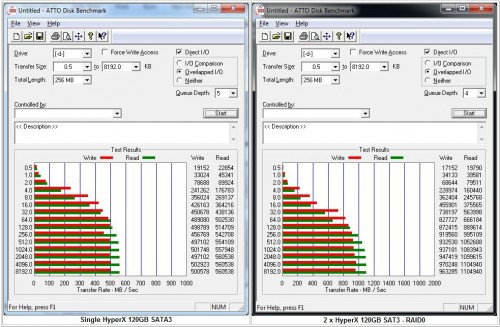 ATTO is a good benchmark tool for measuring storage device Input/Output Per Second operations. The higher the scores, the more corresponding block data the devices are capable of moving in a given second. As you can see, the HyperX 120GB SSDs in RAID0 read score is as high as 1,104 MB/s and write score as high as 970 MB/s. Again, the smaller 4K data block performance is as impressive as ever where much of the real world performance benefits.

The numbers say it all. We love that the Kingston HyperX 120GB SSD offers impressive, stable single and RAID0 performance especially with the recent firmware updates that gave the SandForce SF-2281 controller a shot in the butt. The update is available to anyone with a HyperX SSD.

If one or more of the SSDs are in your future, you’ll find the retail kit bundled with a USB enclosure, Acronis system cloning software and Kingston’s great customer service and 24/7 support. If you need your speed fix immediately, like maybe in the parking lot of the store, then this kit is worth every penny for the pleasure. But for those of you that already have the bundle as your first drive, Kingston also sells a drive only package to save you a few dollars too.