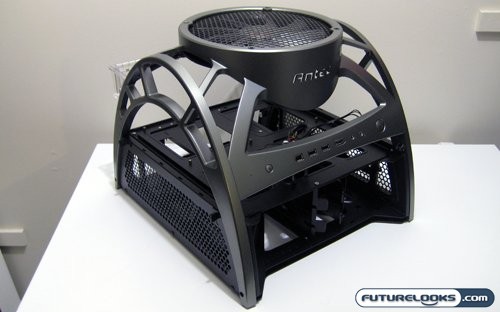 In the realm of the power user, there is a subset of people whose eccentricities go beyond that of their peers. Not simply satisfied with having the latest and greatest components in their hands every 6 months, they then have to constantly tinker with that component and experiment with it to experience every facet of every feature. This means they need to open their cases even more frequently then their “normal” power user brethren, making the standard ATX enclosure somewhat of a hindrance. It is for this group of users that Antec’s latest case was made for.

The Antec Skeleton is Antec’s entry into the rather diminutive market of open air cases. Futurelooks first saw this product at COMPUTEX 2008 earlier this year and had high hopes for it once it hit our labs. Antec does claim this is “the world’s first open-air enclosure”, and though we do find that claim highly dubious, it does sport features and design elements not found in other open air cases. The Skeleton has enough space to store a full computer system, including two 5 1/4″ drive bays, two 3 1/2″ drive bays, and enough room to contain a high wattage power supply. All this is found in a unit that, rather than consisting of a couple shelves, actually has a full frame and structure, as well as an active cooling system in the form of a speed adjustable 250mm fan on top. For the full list of specifications, they can be found on the product home page.

Premium Features at a Premium Price 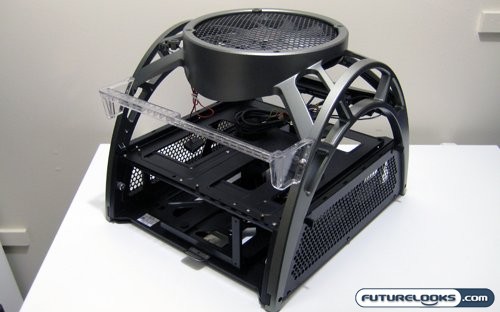 The Antec Skeleton is priced slightly higher than other open air cases. At $180 USD, you may be wondering what you get for the extra scratch. Well many of the other open cases I’ve seen feature mostly plastic or acrylic construction. The Antec case is mostly steel, with only the gun-metal grey pieces being moulded plastic. You also get the extra cooling, and some aesthetic finishes which we’ll take a look at in a few moments. First I want to talk about the additional parts that come with the Antec Skeleton. 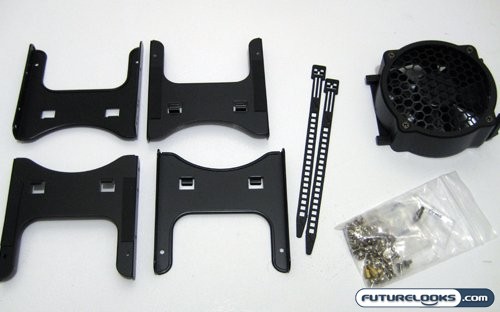 Antec includes a decent collection of doo-dads with the Skeleton “enclosure.” There is of course the standard collection of screws, stand-offs, and washers. They also thought ahead and included some reusable cable ties. Then there’s the structural accessories that come with the Skeleton. Not content with placing a huge 250mm fan on top for cooling, Antec also includes a pre-mounted 92mm fan that hooks onto the front for cooling the hard drives. And should you need to mount more hard drives then the built in two, there are four racks to hang hard drives off the side. You’ll see how those come into play as we go through our visual inspection.