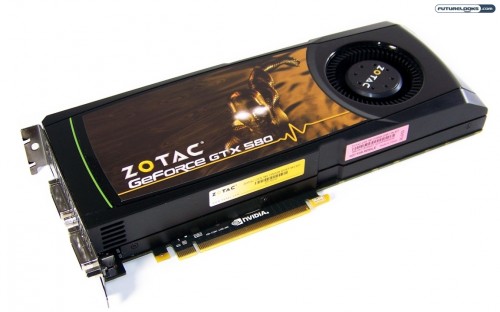 At the beginning of the year, the long awaited and somewhat over due Fermi GPU arrived from NVIDIA in the form of the GTX 470 and 480 video cards. Scrutineers poked at GPU’s performance, noise, and apparent thermal challenges. To summarize, the two video cards were hot tamales, but it did have performance to earn a top spot in NVIDIA’s arsenal. Naturally, improvements to the FERMI architecture rolled out. First it was the nVidia GTX 460, which won gamers back with a sweet spot price of $200. Now we’re heading to the other side of the price/performance spectrum with the ZOTAC Geforce GTX 580. Let’s see what the new nVidia performance king as in store for us!

The GPU core within the GTX 580 (GF110) shares more tangible similarities with its little GTX 460 (GF104) brother than the sibling it is supposed to replace, the GTX 480 (GF100). Namely cool running and a lot of performance potential. Luckily, the goal was reached as the the GTX 580 no longer needs the massive, inefficient beast of a GPU cooler that emitted up to 50dBA during benchmarking. NVIDIA engineers also looked at the thermal solution to make it a lot quieter.

If you recall, the GTX 480 rocked 480 Shaders. The GTX 580 however flexes the full 512 Shaders where Fermi was originally headed before heat and power consumption became an issue. This should mean more performance. But, rather than bore you to death with the entire list of specs improved within the GTX 580, here is a handle little ZOTAC table comparing the two GPU:

One thing definitely worth handing out extra credit for is that even though the GTX 580 offers improved specs all around, it doesn’t require feeding it more power than the GTX 480. In fact, a few watts have been shaved off in the new revision. At max load, the card should only require about 244/245 watts versus the 480’s original 250 watts.

What do you get inside? What does it look like? We’ll show you!

You’ll easily notice that it’s still a really long video card measuring in the same as the GTX 480. But, it’s noticeably lighter which is really good news for people planning on SLI builds. Triple SLI full tower builds were unusually heavy this year.

Based on the frequency and shader increases, I’m expecting a noticeable improvement in performance especially in DirectX11 games. And, I’m expecting to see the same or less power consumed than its predecessor. Let’s just find out.

This build is very similar to the one used with the GTX 470 and 480 launch. This time, I upgraded the processor to a Core i7-875K and memory to some Patriot ViperII Sector 4GB 2400MHz DDR3 down clocked to 1600MHz with 8-8-8-24 timings. It’s not that the Kingston HyperX 4GB 1600MHz wasn’t up to the task, I just needed some memory more tuned for a home theater PC build. Here’s the hardware list:

The suite consists of games that have built in benchmarks. Many of them are stand alone and don’t require you purchasing the game so you can play along at home before spending for the full version. Tests were performed at 1920 x 1200 resolution unless otherwise noted in the results. Even though there are some small programs one can use to enable some ATI type PhysX, it’s not a default card feature at this time. So, I’m not using them in the benches where PhysX is tested.

Temperatures were monitored using OCCT and Hardware Monitor Pro. Noise was recorded 24″ inches away from just the GTX 480 and GTX 580 to reveal any improvements to the reference graphics card. Keep in mind that the Antec P183 enclosure, easily shaves off about 8dB from our results. If you have an open chassis, noise is obviously going to be louder.