ASUS has announced a new line of motherboards that support the Intel Skylake platform and feature the Z170 chipset. Calling this new line their “Signature Series,” the Taiwanese manufacturer hopes to provide a top tier line of boards that work great for day-to-day productivity, entertainment, and gaming.

The Z170 Signature Series will focus on offering the best features in their class. These boards will feature dedicated overclocking abilities, implementing a dedicate microprocessor for unlimited clock speed potential. The boards will also feature Crystal Sound 3, a dedicated onboard sound sub-system with premium components to provide immersive audio. 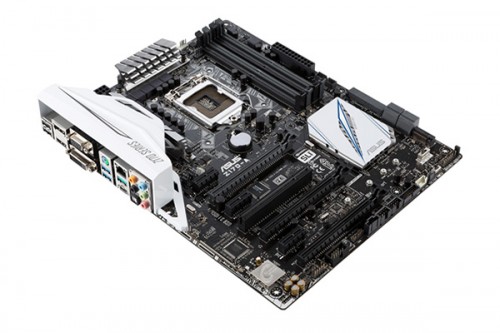 Though we only have photos of two of the boards from the Z170 Signature Series, a total of eight boards have been announced for the new product line. They vary in their connectivity options and included options, but they all feature support for the Intel 6th Generation Core processors and Z170 chipset.

These new boards are available now from ASUS authorized resellers. There’s a wealth of information to be found about the new line in the press release below.

Overclocking and system tuning made easy
Tuning a new system for the best overall performance can be a daunting task for newcomers to PC DIY. To make the process easier, most motherboards offer basic overclocking profiles that apply predetermined values. However, the overclocking ability of the platform can vary widely, so there is a downside to using preset overclocking profiles—the parameters applied may not make best use of the chosen CPU, cooling, or memory modules.

The best fan controls available – period!
For the ultimate in cooling and quiet operation, the Z170 Signature Series features advanced fan controls coupled to onboard thermal sensors and hardware-level 4-pin/3-pin PWM/DC modes for every header. Each chassis fan header can be assigned to react to different temperature diodes for optimal cooling. A dedicated water pump header is also onboard; it’s set to run at full speed by default to prevent spin-up issues. The water pump header is fully controllable, supporting both PWM and DC pumps. Every onboard header can be controlled easily via Fan Xpert 3 software or via the intuitive interface of the ASUS UEFI.

If that’s not enough, an onboard header is compatible with the ASUS Fan Extension card** (sold separately), which lets users plug in and control three additional system fans in PWM or DC mode. This card has headers for additional temperature probes, too. Simply put, the cooling controls on the ASUS Z170 Signature Series motherboards put competing motherboards and dedicated fan controllers to shame!

The best UEFI
The cornerstone of any motherboard is its UEFI. At the back end, UEFI coding should be intelligent enough to automate as many advanced settings as possible for beginners. The front end should provide interface options that are suitable for every demographic, whilst being responsive to input. Since the inception of the UEFI, ASUS has come closer to fulfilling these ideals than anyone else.

For the Z170 Signature Series, new options have been added to the fan controls and My Favorites. Users can monitor SMART status and secure erase SSDs inside the UEFI, and they can check on installed graphics cards with GPU POST. The integrated EZ Flash 3 utility can even download the latest UEFI updates automatically over the Internet. These new additions make system setup easier than ever.

On the Z170-Deluxe, the Intel Ethernet is backed by 3×3 802.11ac Wi-Fi that ensures super-fast connectivity for wireless networks. The onboard Wi-Fi works with Turbo LAN, too.

All the Z170 Signature Series motherboards have a 256-color LED that lets users customize the lighting of their builds. This LED can also be set to reflect the CPU temperature or pulse to the beat of the music playing through the system.

The Z170-Deluxe comes with a Hyper Kit U.2 that supports 2.5-inch NVMe storage, plus a Hyper M.2 x4 Mini adapter card that provides an additional M.2 slot. Users can combine two PCIe SSDs in a RAID 0 array to enjoy even faster storage performance.