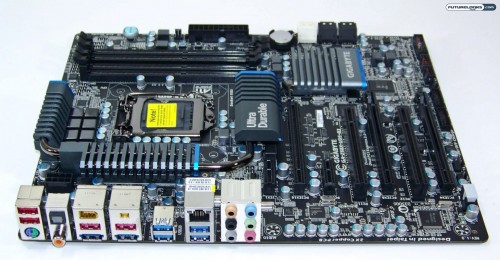 Here, we have the Z68X-UD5-B3 which is one of 7 boards that offers Intel Smart Response but does not LucidLogix Virtu. Therefore, it doesn’t have any video out ports and is aimed at gamers who may not be worried about using Sandy Bridge’s integrated graphics for anything. On the one hand, there’s more USB and eSATA without options traded for the loss of Virtu. On the other hand, you’re missing out on a feature that is a signature of the Z68 platform. If you want Virtu, you’ll have to opt for one of their four cheaper models in the Z68X-UD3 series. 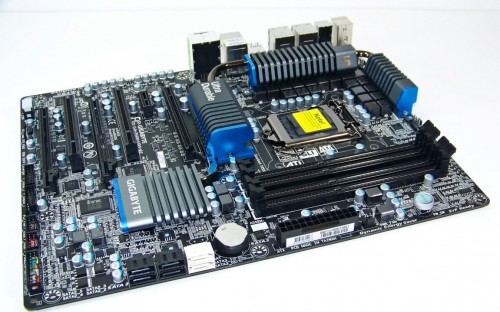 Like previous UD5 boards, this is a fully loaded ATX platform boasting all the latest expansion features like USB 3.0 and eSATA 6Gbps. It sports many of the same features as the P67A-UD7 we reviewed a couple months back, but without the 3-way NVIDIA SLI. This board also packs driver-MOSFET 20-Phase circuitry in tothe platform. Obviously, that means there is some head room for high end overclocking performance.

The new Z68 series also features GIGABYTE’s new Windows based Click BIOS rather than a UEFI BIOS. The word from their engineers is this is a more stable solution. Future testing for our X68 round up will confirm or deny this rumour. But we remain skeptical that a software BIOS control can be more stable than direct BIOS control at start up.

Compared to the Z68X-UD5-B3 is a higher priced platofrm at $269 USD/CA. However, you can get the more modest Z68X-UD3H-B3 for $179 US/CA without the high phase overclocking and 6Gbps eSATA. The rest of the UD3 models continue to drop in price as you go down the line. With eleven boards in the line up, GIGABYTE definitely has the widest stable of boards of the Z68 bunch.

In order to test the two new features  of the INTEL Z68 platform, and to show off  the new Virtu powered integrated graphics, we’ll be running very similar components to the ones in our P67 round up. The only additon will be Intel’s new 20GB 311 SSD which will allow us to properly test Intel Smart Response.

The Larson Creek SSD has been launched specifically to support of Intel Smart Response. It offers sequential read 200MB/s – write 105MB/s transfer rates and 4KB random data read 37K – write 3.3K transfer rates. This is not really meant to be a boot drive as much as a “cache” drive for the Z68 system.

Here’s the rest of the system setup:

We’re running the Z68 motherboards with the BIOS that they shipped with. We’re also using the latest NVIDIA 270 series drivers. The driver configurations were left to default as installed. Let’s cover a couple quick notes about getting Intel Smart Response set up. 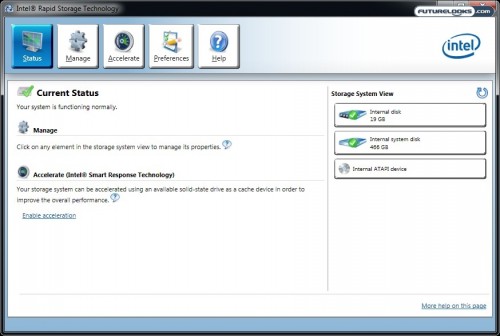 Assuming you already have an SSD or plan to get one to add later, users need to first set their BIOS storage option to RAID in preparation of installing the OS. Setting up RAID in advance of getting your SSD will not degrade desktop performance. Save and restart the system. You do not need to configure your RAID configuration. Go straight to installing the RAID driver as needed in the OS.

Once Windows is patched and ready to go, install the Intel Rapid Storage Technology software. The system may need to be restarted a couple times. Finally, start up IRST. There should now be an Accelerate button in the header. Select the SSD you added in the right column and press Accelerate. IRST will set the SSD up automatically including formatting. 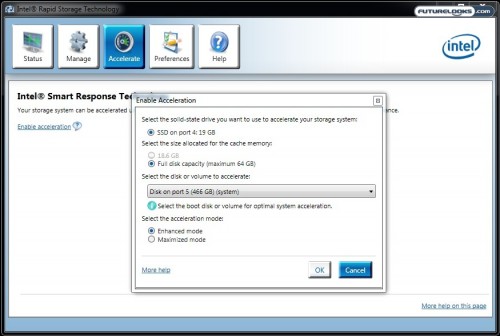 Special Note: Now, if you happen to set up your system without setting up RAID in the BIOS first, or you forgot to and are now reading this, there is a handy automated fix that may be able to help save you a lot of time. With the help of our elite Intel colleagues (Sir Justin and Sir Alan) in Oregon, we found this work around very useful after a couple quick tests.