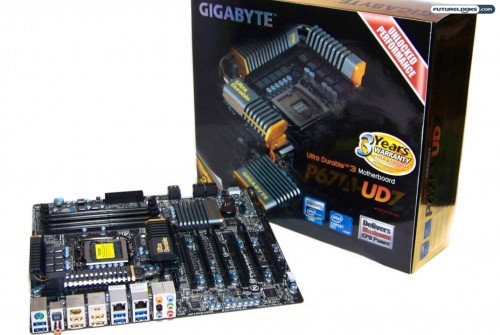 Note: Intel’s recent press release identifies an issues with the P67/H67 chipsets. This issue affects only the SATA2 (or SATA 3Gbps) devices plugged into ports 2 & 5 on all motherboards using these chipsets. There is a possibility that long term use will slowly degrade SATA2 performance without damaging your storage component. Intel has already taken steps to rectify this issue in all future motherboards that will arrive in April. We did not experience degradation in our testing. More information can be found here.

Last year at IDF 2010, we were honored to give computer enthusiasts an exclusive look at INTEL’s new Sandy Bridges motherboards starring GIGABYTE’s early production P67A motherboards. Today, we’re moving up from wishing we had one to physically presenting you with the GIGABYTE GA-P67A-UD7 motherboard in all its glory. The question is whether or not all that preliminary drooling was worth the mess. Grab your napkins and lets find out. 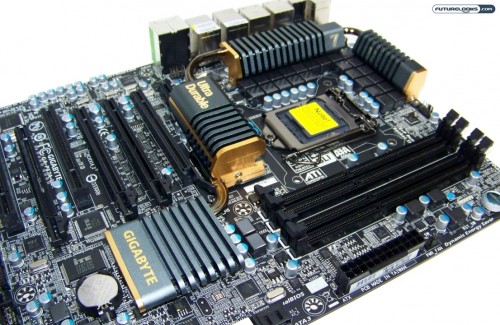 In our IDF 2010 video, Mr. Colin Brix of GIGABYTE’s Taiwan HQ was kind enough to give us a run down of all the board’s features. We can confirm a dual set of NEC USB 3.0 controllers feeding 6 ports as well as full 3-way SLI and CrossfireX support for frame rate hungry gamers.

The board also offers the industry’s first 24-phase CPU VRM power design coupled with GIGABYTE’s signature Ultra Durable 3 components, ensuring optimal stability no matter what you’re doing. If something does happen to go wrong, the platform’s Dual Bios feature comes in very handy when recovering the system from a bad configuration.

The integrated dual LAN technology is supported by Realtek 8111E chips which is adequate but other companies have raised the bar and have gone with Intel Pro NICs. In fact, GIGABYTE’s G1 Killer series utilizes both a Killer 2100 NIC and an INTEL Pro on their boards, raising the quality of networking. The Dolby HD Home Theater audio is supported by a Realtek ALC892 codec. It’s one of the nicer integrated codecs available as long as implementation is done well and driver software is well tuned. 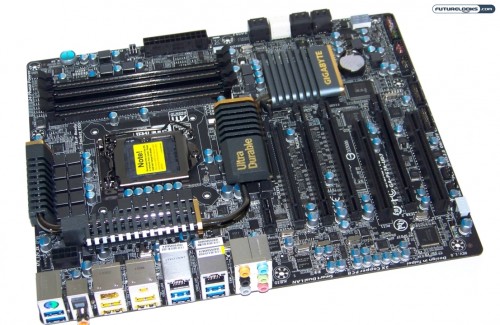 The motherboard doesn’t offer a UEFI BIOS like many of the others on the market. GIGABYTE told us it’s mainly due to some stability issues as it’s semi-new to the PC side of the industry. They have faith in the tried and true BIOS of old. That could change in the future if the coding lives up to their expectations. In the meantime, the P67A-UD7 supports a hybrid BIOS that supports 3TB storage devices.

Pricing on the GA-P67A-UD7 starts in at about $310 to $320 USD from the usual places. The lower end UD5 will cost about $260 while the mainstream UD4 coming in our round up starts at $190 USD. This is clearly the top end Sandy Bridge board in their collection. At least until they create a G1 Killer version.

Even though you pretty much get all the pertinent information from the IDF introduction, we’ve decided to give you an updated look at the board.

The UD7 really is a sleek, low profile motherboard. When one chooses a board, it’s often an extension of one’s taste. If looks could kill, you would “pwn” by simply using this board. But let’s make sure that the “pwnage” isn’t skin deep in our bests.