When Twitter first launched in 2006, it was a preferred microblogging arena for social media enthusiasts and diehard online geeks. These days, it’s populated by everyone from Jason Calacanis to Perez Hilton, Miley Cyrus to Martha Stewart. If you don’t think this social networking service has gone mainstream, you’re probably still living under a rock (or just haven’t embraced your inner geek).

The thing is that most people don’t know how to make the most of their Twitter experience. They sign up for an account, follow a couple of their friends and maybe a handful of celebrities, and they just leave it at that. This is not how you capitalize on the power of Twitter. To do that, you need to get the right interface.

We’ve compiled a collection of some of the most popular Twitter clients available for your desktop or notebook (or netbook) computer. We’re showing love to both the Windows and Mac folks in the audience and, if you’re willing to give it a whirl, some of these may work in Linux too. Which reigns supreme? Let’s see what’s out there.

When you first sign up for an account on Twitter, this is probably where you get started. In many ways, the main Twitter website is the meat and potatoes of the microblogging service, but like meat and potatoes, it’s not all that satisfying after a while. The provided features are pretty basic and they don’t come with any of the fixings that you’d find on some real Twitter clients.

From the Twitter website, you can send out a tweet, access your replies (which are now called mentions, apparently), read your direct messages, and follow (or unfollow) other accounts. It’s nice that they have added the “trending” topics in the sidebar, so you can see what everyone else is currently tweeting about.

Perhaps the biggest pitfall of using the Twitter website as your primary client is that it does not auto-update when new tweets come in. Instead, you have to refresh the page yourself. You also don’t have integrated access to things like TwitPic, URL shortening, and so on.

TwitterFox Hides in the Taskbar 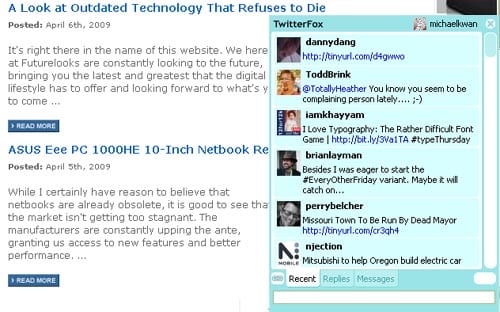 Mozilla Firefox is one of the more popular web browsers out there, regardless of whether you’re running a machine powered by Windows, Mac, or Linux. Surfing through the Mozilla site, you’ll find an ever-increasing abundance of add-ons for Firefox. Some of these help to manage your bookmarks, for example, whereas others aid in the downloading of embedded videos. Not surprisingly, there’s also a Twitter client in there too.

TwitterFox is one of the less invasive desktop Twitter clients, because it runs from within your web browser. It shows up as a small Twitter-styled “T” in the browser’s status bar, popping up with a dialog window when you receive new tweets from your friends. There are separate tabs for regular tweets, replies, and direct messages.

Get it at Naan Studio