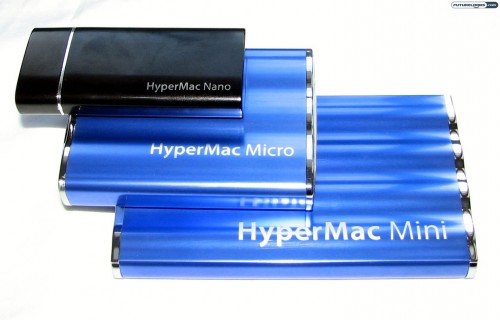 One of the major reasons why I chose to become a freelance writer in the first place was that it afforded me the freedom of location. I can travel almost anywhere and continue to run my business remotely via the Internet. However, I’m not always next to a power outlet. What is a traveling techie to do?

While we were wandering through the hallowed halls of the Consumer Electronics Show, we found ourselves paying a visit to the people at Sanho Corporation. That’s the company behind the HyperMac brand of external MacBook batteries, but they’ve got some even more portable variants available now too! Let’s have a look at their little brothers and sisters. 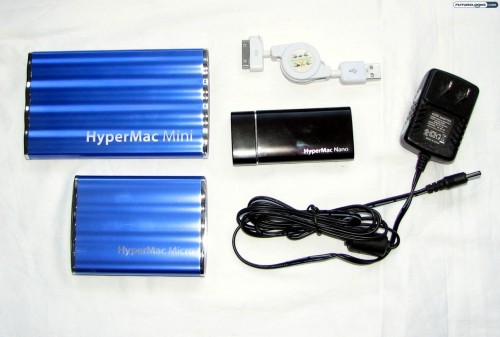 Whereas you can get your hands on the HyperMac External MacBook Battery and Car Charger to keep your Apple laptop topped up on the go, what are you supposed to do with your iPhone, iPod, and other portable electronics. Fret not. HyperMac has just introduced the HyperMac Nano, HyperMac Micro, and HyperMac Mini.

These take on fundamentally the same concept as accessories like the Mophie Juice Pack and the Proporta Mobile Device Charger. They let you charge your electronic device anywhere you go making it possible to take along lots of cool gadgets for your outdoor passions.

The core market is the iPod and the iPhone, but there’s no reason why you can’t use it with a BlackBerry, Nokia smartphone, Samsung MP3 player, or any number of other portable devices. You will notice that the entire line is available in nine different colors, corresponding to the iPod nano rainbow from Apple. These include pink, red, orange, yellow, green, blue, purple, black, and silver. 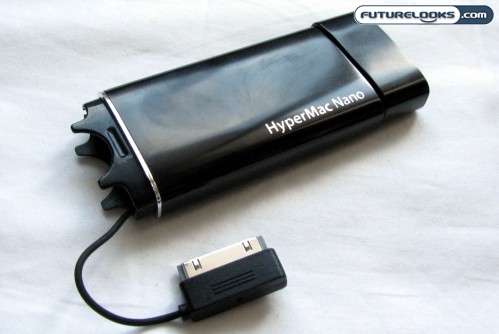 Perhaps the most innovative of the bunch is the HyperMac Nano. This portable battery pack is about the size of a Zippo lighter but it contains 1800mAh of mobile juice for your iPhone or iPod.

To put things in perspective, the internal battery for the iPhone 3GS is rated at 1219mAh, meaning that the HyperMac Nano has enough to charge your iPhone about one and a half times. The Mophie Juice Pack Air, by comparison, is only 1200mAh.

The other major advantage that the HyperMac Nano has is that it is the world’s only (to date) iPhone/iPod battery with a built-in charging cable. There is no need to bring an extra cable with you. 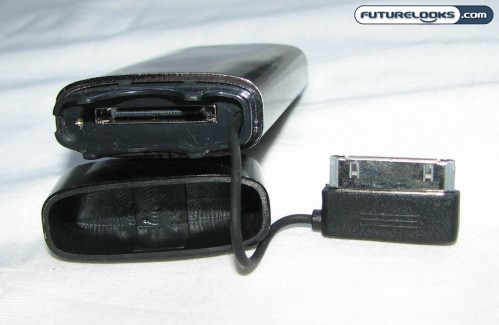 When you remove the cap, you’ll see that there is a short cable connector housed within that plugs back into the HyperMac Nano itself. Unplug this and plug it into your iPod or iPhone and it will automatically start charging your mobile device.

Interestingly, the cap can be attached magnetically to the end of the HyperMac Nano. You’re less likely to lose the cap, as a result, but bear in mind that the magnet isn’t exactly the strongest thing in the world.

I do appreciate the full aluminum housing, though, which adds a huge dash of class over its plastic competitors. With its mobile size and reasonable $39.95 MSRP, the HyperMac Nano is a winner in my books.