For this demonstration, we used the ASUS P8Z68-V Pro as the GIGABYTE does not have Virtu onboard. To experience the benefits of Virtu, enter the BIOS, locate, and enable the LucidLogix Virtu option. Simply save the settings and boot back in to the OS. Windows should now prompt you to install the “video controller” driver needed to initialize the IGP. If not, manually install the video driver through the hardware management. 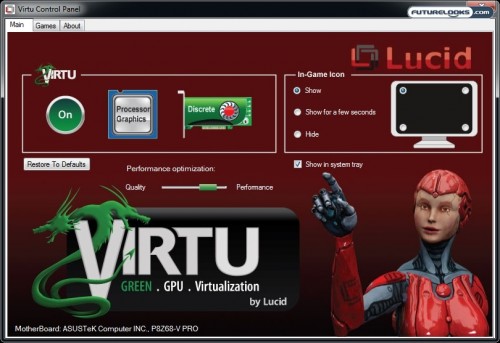 Once it’s installed, it’ll look exactly like this. Clicking the “ON” button activates Virtu. Now, you have the benefits of Intel Quick Sync for some super quick transcoding on supported apps while playing a few rounds of your favorite game title on the other monitor. We observed a resource load increase of about 10 to 35% while transcoding a 1GB video to 720p and running Battlefield Bad Company 2. Your resource load will vary depending on what you’re actually doing and playing. Of course, if one isn’t doing anything with INTEL Quick Sync, then there is no additonal system load as the IGP is effectively turned off.

To demonstrate the tangible benefits of the new Z68 chipset using Intel’s 311 series SSD, we’ll be using Sysmark 2007 under stock settings. Sysmark performance can be effected by the performance level of the SSD and its ability to cache data. We’ll revisit this again later in a small SSD performance comparison. Preliminary testing thus far points to the best value being found in SSDS sized from 20 to 64GBs. That means that you shouldn’t run out and waste your money buying a 128GB SSD as the maximum cache size supported is only 64GB anyway.

Even though Z68 overclocking isn’t included in Sysmark scores, we have been looking into it and have a small spoiler in advance of our round up. Preliminary overclocking on the ASUS P8Z68-V Pro at 1.45 volts pushed the CPU to 4.6GHz. The GIGABYTE Z68X-UD5-B3 on the other hand pushed the CPU to just about 4.5GHz with the same voltage. While the GIGABYTE is positioned as the premium offering, our preliminary look is saying otherwise. But we will be back with a final verdict a little later.

We’re sure you would like to see how some of the other Z68 motherboard options out there stack up and we’re happy to bring them to you very soon in our upcoming round up. For now, let’s get to Sysmark and see what Intel Smart Response does for us.

This program benchmarks a computer’s overall performance. E-Learning, Video Creation, Office Productivity, and 3D Modeling are all areas that are looked at and a score is given at the end of each test. The higher the score, the better of course. 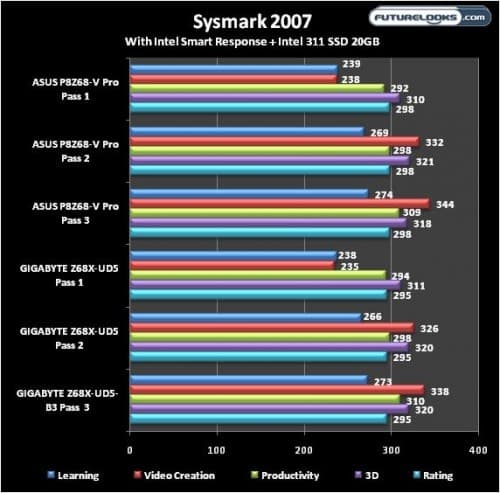 Your eyes do not deceive you. We reran triple iteration tests over and over with similar results each time. Without running Intel Smart Response, the stock Z68 systems are slightly faster than the P67. But, with the Intel 311 SD in Smart Response mode, the Z68 machine’s score were off the chart. In fact, the score improved upon each subsequent pass of the benchmark. 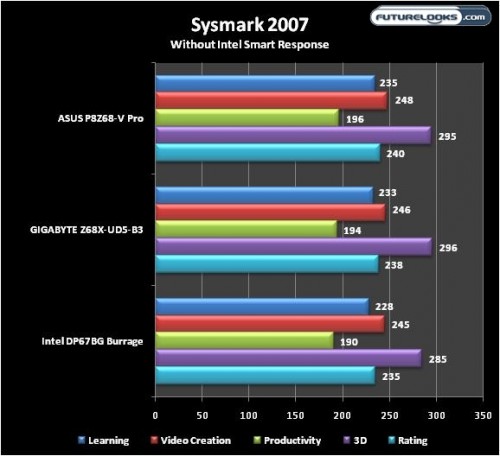 Here, you can see how the three systems perform without Intel Smart Response and the benefits of the 20GB SSD cache. Without the feature, we see a very different picture. It’s much slower overall, but still somewhat faster than the P67 system, which could merely be optimizations and better tuning in the newer Z68 platform. However, Sysmark doesn’t tell us how it does with 3D performance so we’ll be moving to 3DMark11 next.