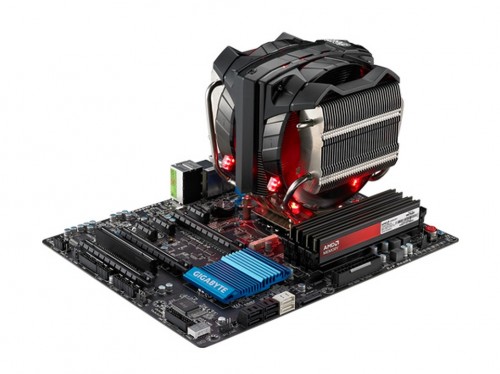 Cooler Master is always amongst the top brands for PC case and CPU coolers. While air coolers seem to slowly be replaced by AiO (All-in-One) liquid cooling solutions, the company is not ready to let air cooling go so easily. They began developing new technology to aid air coolers, including their Horizontal Vapor Chamber technology. And now they are ready to implement it at its best with the new V8 GTS CPU Cooler.

As the spiritual successor to the original Cooler Master V8 CPU Cooler that we reviewed back in 2008, this massive three tower cooler is also designed to maximize heat dissipation, while at the same time, minimizing RAM module obstruction. The HVC technology dissipates heat evenly across the entire cooler for better efficiency and high cooling potential. Then the 140 mm low friction POM fans ensure high volume airflow keeps the fins ready for more heat to be pulled off your CPU. The final piece is the signature V8 car engine inspired shroud to help direct airflow out of your case. 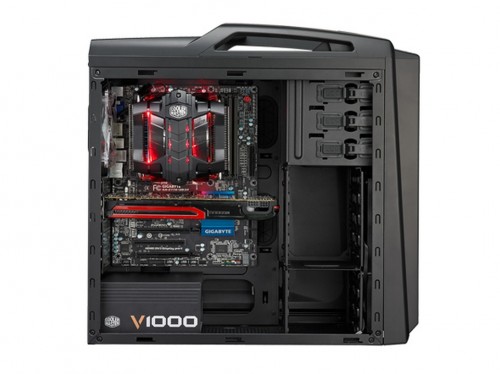 If you are using a CPU that has very high heat dissipation demands like the recently released 220W AMD CPUs, the V8 GTS could be your solution of choice in air cooling, providing potentially higher overclocks and or lower noise. The Cooler Maste V8 GTS will be available in August. Price and availability may vary based on region and should be available in the US and Canada regions first. The full press release is at the link below.

Seemingly channeling the power of the muscle cars that inspired its design and the wind deities that grant them passage, V8 GTS is without equal. It dissipates large amounts of heat through its marriage of HVC and an optimized fin tower design. V8 GTS is built with triple tower heatsinks and eight high performance heat pipes all to channel the massive amount of heat being pulled away from the processor by the vapor chamber. Despite its menacing high performance engine outlook and large stature, V8 GTS still leaves plenty of space for memory slots.

Dual high airflow 140mm fans funnel a veritable vortex through the triple heatsink array. These fans are equipped with a new generation of fan bearings known as POM. These fans are not only virtually dustproof, they will last up to an astounding 160,000 hours of use. This lifespan is due to a unique self-lubricating and low friction POM bearing design. Meaning the fans and the V8 GTS will likely keep cooling your parts long after they’ve expired or become obsolete many times over.

Cooler Master Engineers have worked to solve how to transfer this highly effective cooling method into CPU coolers for some time now. V8 GTS is the result of their perseverance. HVC consists of highly advanced metal heat spreaders that draw heat away from a single or multiple heat sources. The Vapor Chamber aspect is the hollow interior of the HVC structure that is filled with coolant that cycles between evaporation and precipitation to circulate within the container. This cycle draws a massive amount of heat away from the heat source. From here the HVC transfers the heat evenly to multiple direct contact heat pipes that send the heat up an optimized heatsink tower where the powerful V8 GTS fans expel the heat. The extraordinary result is that the V8 GTS can handle thermal loads up to an astonishing 250W.

To call the V8 GTS a mere air cooler would be folly. It is the prime example and the flagship of the widely popular V Series CPU Coolers.

V8 GTS will be available in August. Price and availability may vary based on region. This release is meant for the U.S. and Canada region(s) only. Please consult your local Cooler Master Representative for more information.