Slick On-Screen Interface is Back in Black

One of the complaints that I had about the Hi-Den Vision was that the interface was clunky and unresponsive. That’s why I still prefer to use my Xbox 360 as a media player. The on-screen interface just works so much better. 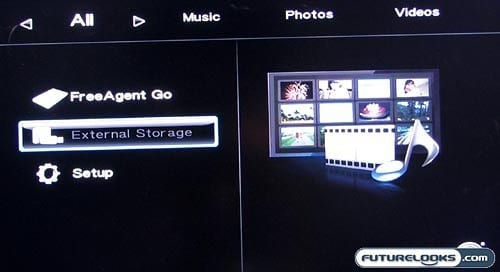 The on-screen interface for the Seagate Theater HD Media Player fits somewhere in between. It’s certainly slick-looking with its clean black background and simple icons, but I still found that it wasn’t quite as responsive as my Xbox in terms of getting through menus and such. That said, it does come with more features.

Navigating horizontally gets you to choose between all, music, photos, and videos. From there, you can choose either to access the attached FreeAgent Go portable hard drive or some sort of external storage you have connected to the USB port.

Video Previews for the Win!

Not familiar with the file names? Not sure which episode you should be watching? Perhaps the single greatest feature found on the FreeAgent Theater is that when you have your selection bar over a video file, the clip is previewed in the window on the right. This adds a touch of lag to the menu, but I think it’s worth it. 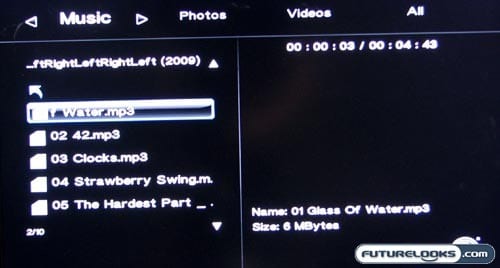 While the media player here may not be quite as robust as the software you have running on your computer, I am glad that some rudimentary features have been implemented here. For instance, the music player is able to shuffle the songs within a single folder. This isn’t perfect, but it’s acceptable.

As with so many of these media players, the true value boils down to file support. As mentioned, Seagate says that the FreeAgent Theater will be able to handle MPEG-1/2/4 files, including those encoded in DivX or Xvid. Well, it’s not perfect.

In my tests, it would not play an MP4 file. That much was largely expected. However, the FreeAgent Theater also wouldn’t play some of my AVI files. Apparently, the codec is not supported. It did play one file that my Xbox 360 didn’t recognize though. I’m thinking that this issue can be resolved with a comprehensive firmware update. 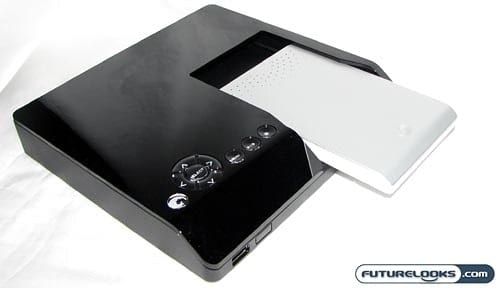 Compared to some of the generic solutions on the market, the Seagate FreeAgent Theater is much more polished and complete. The interface is slick, the file support is acceptable, and I like how the FreeAgent Go portable hard drive comfortably slides into its slot in the player. The insertion and ejection process reminds me of 8-track tapes. Remember those?

This product is not without its faults. There is no HDMI output, which is a pretty big deal for me. It’s also unfortunate that it won’t play MP4 files and is not completely up to date with audio/video codecs. The subtitle support is a nice touch and despite a mere component connection at best, the video quality is acceptable albeit far from breathtaking.