When someone asks for my recommendation on how much RAM they should buy, it simply comes down to what you intend to do with that computer. Gaming computers realistically don’t need much more than 2GB. Heavy multi-taskers and moderate power users would benefit using 4 to 6GB of RAM. And the advanced power users who compile large amounts of code, create large renderings, or run a large array of programs all at once definitely want 6 to 8 GB of RAM. 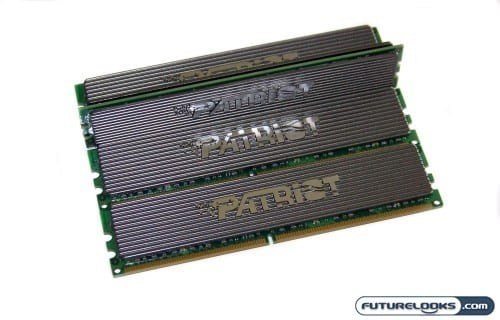 The larger amount of RAM is used as cache for the Operating System, the large programs you’re using, and allows extra memory space for doing other things like running even more programs. Without the extra resources, your system’s computing power is greatly hampered because it has to juggle data around to make room as you open more programs. Often times that means swapping to the much slower hard drive which brings things down to a grind.

One option to remedying your system’s limited resources is to acquire Patriot Memory’s Extreme Performance DDR2 8GB (4 x 2GB) PC2-6400 Low Latency Quad Memory Kit. With 8GB’s of memory at your disposal, that should be enough right? Let’s find out!

Why Eight Gigabytes of RAM?

Motherboards that support “Dual Channel” DDR2 or DDR3 memory benefit greatly from matched pairs. The memory controllers built in to the Chipsets are designed to access memory in pairs simultaneously. For example, in Dual Channel mode, the system accesses the two memory modules at a time for greater memory bandwidth. If you add a third module, even if it matches the specs of the other two, the system will actually operate more slowly since the memory controller now has to access the other individually.

That’s also why you see them sold in even numbers which includes the 4 x 2GB memory kit here by Patriot Memory. Most every supporting motherboard can continue operating in Dual Channel mode since the system is still accessing two memory modules from the four memory banks called DIMM slots. As long as you install even numbered matching memory kits, your system will continue operating at its best. 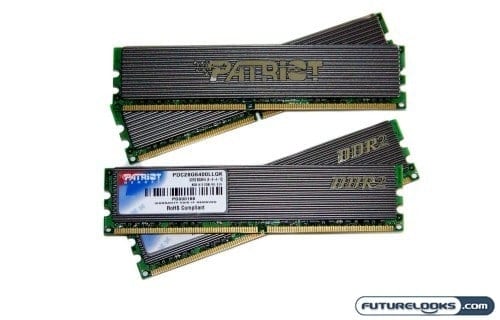 Patriot’s value proposition on the Quad 8GB Kit (PDC28G6400LLQK) is that it expands your gaming options. When you have 8GB carrying vital data to and from the processor, you’re bound to do a lot more than just gaming. There’s also more benefits to having 8GB like improved memory bandwidth, stability, and no longer worrying about programs crashing due to limited resources.

An important thing to remember is that you’ll need a 64-bit Operating System in order to put the full 8GB to work. The optimal choice would be Vista 64-bit as 32-bit will only page about a maximum 3.5GB worth of RAM. Plus, it’s the current fully supported OS until something else (Windows 7) comes along.

The Quad Kit contains Patriot’s patented Aluminum Bladed Heat Shields. They aren’t the most up to date heat spreaders but it doesn’t mean the kit is built with anything less than quality ICs. The ICs underneath here are strong enough to last for years to come and probably well in to the age of your next computer system. Also, when it comes to professional end users, “style” isn’t quite as important as function. The goal of such a kit is to last and last handling daily tasks efficiently.

The memory’s 4-4-4-12 timings can accomplish more than a comparably tuned 5-5-5-15 memory kit. These lower timings are a big bonus for faster read and write transfer rates not to mention quicker system operations.