Start by Docking the Drive

The Seagate FreeAgent Theater is available in three different versions. You can buy the HD media player solution on its own if you prefer, but you’ll get a better value by opting for the versions that include a FreeAgent Go portable hard drive instead. The version that I’m reviewing comes with a 250GB drive, but you can opt for the 500GB variant too.

Since the FreeAgent Go comes in a variety of colors, you can effectively organize your media collection based on color, docking the drive of choice into the FreeAgent Theater as desired. This helps Seagate’s business, of course, but as mentioned, you can run things from the single USB port too.

A Shiny Box of Multimedia Enjoyment 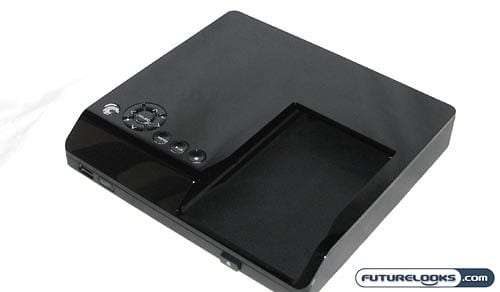 Measuring 31 x 183 x 180mm (1.22 x 7.20 x 7.09 inches), the Seagate FreeAgent Theater HD Media Player is fairly compact and will be able to fit into just about any home theatre arrangement. It’s not quite as small as the Hi-Den Vision, but that didn’t come with a hard drive docking slot. I’d say that the FreeAgent Theater is about the same size as those compact DVD players.

The glossy black casing is quite classy, but I find that it clashes with the provided silver FreeAgent Go portable hard drive. I don’t think that it’ll look very good with anything other than a black hard drive, but that’s a matter of taste.

Turning around to the back of the device, you’ll find the connectivity options that it offers. Since it is being marketed as an HD media player, I fully expected that it would come with a more comprehensive set of high-definition ports. Unfortunately, this is not the case.

Included in the box are a set of standard composite video cables, giving you a paltry 480i experience at best. In addition to the composite connection, the FreeAgent Theater also lets you do S-Video or component, but there is no DVI or HDMI option. I would have really liked HDMI output, since it’s just so much easier to connect to most contemporary HDTVs on the market.

On the audio side, you choose between the usual RCA stereo or coaxial. There is no optical option. Again, this is quite disappointing. If this is going to be an HD set top box, I expect it to be able to do what a Blu-ray player can do. 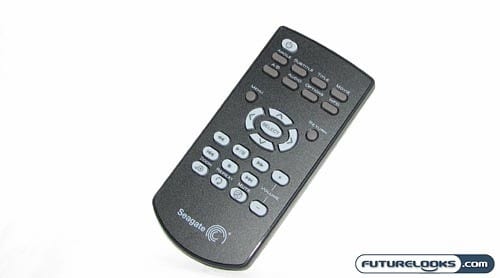 Included in the box is a fairly standard remote control. This can be used for turning the system on and off, navigating through the menus, advancing to the next track, and so on. Since the FreeAgent Theater supports subtitle files, there is also a button to control that aspect of your video watching experience.

I initially thought that the audio output on the media player was quite a bit lower than other products I have connected to my Samsung TV, but it turns out that the Seagate player has its own volume control as well. This way, you don’t have to switch between the Seagate remote and your TV remote. That’s pretty handy. 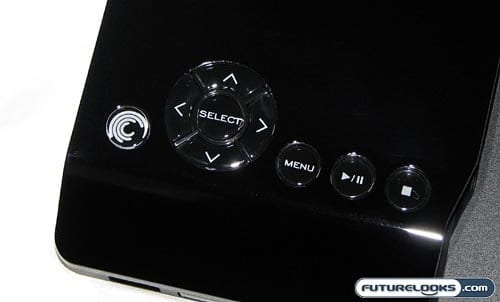 The core controls are duplicated on the top of the FreeAgent Theater itself. You get the five-way navigator, a power button, menu button, play/pause, and stop. You can get basic functionality if you happen to lose the remote, but it’s just that: very basic. Don’t lose the remote.