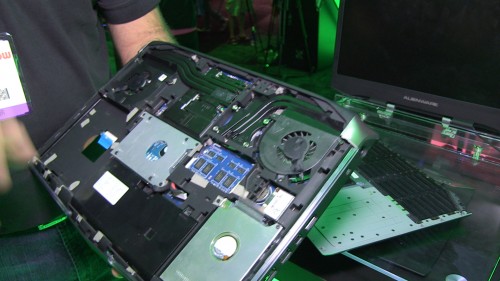 Futurelooks wasn’t supposed to be at the E3 Expo in Los Angeles this year. But after some very last minute arrangements, we were on our way to LA to see the Xbox One and the Playstation 4. But of course, you know that isn’t what we’re all about here (check out MEGATechNews’ E3 2013 coverage). So instead, we strolled the floor and found Alienware Gaming Notebooks. They were showing off their completely redesigned product series at the show which was great timing since it’s been quite some time since we’ve given the company a second look. We had a chance to talk to their General Manager, Frank Azor, about what’s new with the new gaming notebooks. Check out the video below!

(If you’re having problems viewing it on this page, you can check out the video directly on our YouTube Channel)

Although the notebooks really are completely redesigned, there is no mistaking them for anything but Alienware. What we were most impressed with was the amount of metal used in the design, from the hinges, to the full magnesium base casing, all the way to the way the screen is protected with yet another magnesium shell. All their machines have this sort of build quality from their Alienware 14 all the way to their massive Alienware 18, which didn’t really seem that massive in person (though it can hold up to four hard drives inside).

Alienware has gone with anti-glare screens (finally) in their Alienware 14 and Alienware 17 units, but the 18 inch still has the glossy screen, but with a higher end IPS panel. All of them also have a minimum 1920×1080 resolution, even the smallest 14 inch model.

You’ll also be getting the latest INTEL Haswell processors onboard (see our review of the desktop version) which save a ton of power in the mobile form factors, and the new NVIDIA GTX 7xx series mobile Kepler GPUs inside. One other very unique thing is the fact that they’ve gone as far as using low voltage DDR3 to save power, boosting batter life across the board in their line up. In fact, their Alienware 18 has around 3 hrs of battery life, which beats most 15.6 gaming notebooks built within the last year.

Thanks to the detailed tear down, we also see some amazing potential for DIY ugprades and mods that will keep one of these current far beyond their useful years.

Fore more E3 2013 check out the coverage from MEGATechNews as well.