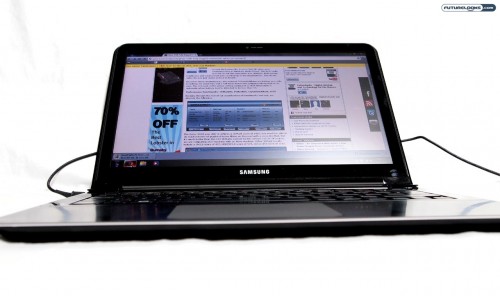 More and more consumers are looking for thinner and slimmer electronics. We like slim TVs. We like thin cameras. And this fascination with increasingly slender profiles has clearly extended to the world of notebook computers too, but the MacBook Air from Apple isn’t the only thin game in town. Samsung wants to take a bite out of that market too.

We were first introduced to the Samsung Series 9 family of slim notebooks at CES 2011 in Las Vegas earlier this year. Now, that beauty of a laptop has hit the market and we’ve got our hands on a review sample. And yes, it’s the higher end version to boot. 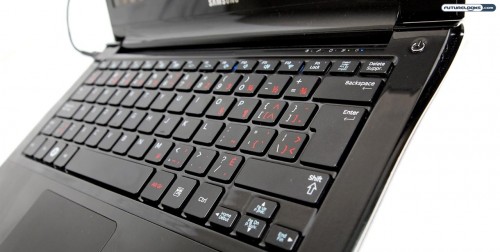 At this time, there are basically two different versions of the Samsung Series 9. They both share the same chassis and design, meaning you get a package that measures between 0.62-inches and 0.64-inches in thickness. They also both come with what Samsung calls a Duralumin enclosure, which offers twice the strength of aluminium in an ultra-light aircraft-grade package. Beautiful.

If you want to save a few hundred dollars, there’s also the Samsung NP-900X3A-A01CA. With an MSRP of $1,699.99, you get bumped down to 4GB of RAM, 128GB SSD, and no TPM support. Aside from that, the substantially cheaper model is basically the same.

So, what do you find when you crack open the box? Check out my unboxing video to find out:

In case you’re not the video-watching type, opening up the high quality retail box, we find the Samsung Series 9 notebook PC itself, as well as the power cable and power supply, which is quite a bit smaller than most other laptops. This takes a page out of Apple’s book, so to speak, because the “brick” part is right at the plug rather than being a separate brick. They’ve also included swappable prongs, so you can travel internationally a little more easily.

Beyond that, you get with a cleaning cloth, an Ethernet network adapter, system recovery CD, and a slew of the usual supporting documentation, like warranty information and a quick start guide.

Input and Output Ports and Jacks 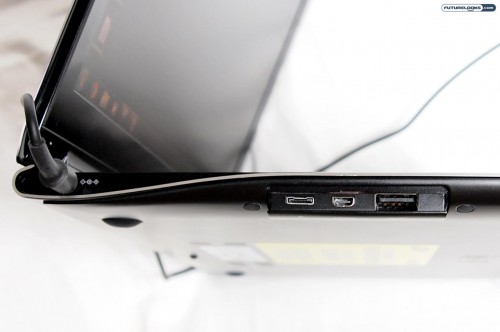 So, how can you connect this beast to the rest of the world and with your existing assortment of peripherals and accessories? It’s clear that Samsung has borrowed a fair bit of inspiration from Apple, because the Series 9 features the same kind of “flip-out” port mechanism as the MacBook Air, except it does it on both sides.

Among the ports is one for micro HDMI out, which can be very handy when you want to dock the slim machine to a larger LCD monitor or HDTV. Instead of having separate headphone and microphone jacks, the Series 9 is more like a smartphone with its combined port. There’s a USB port on either side with USB 2.0 on the right and “SS USB” on the left; the latter is effectively USB 3.0, but it’s not blue.

Rounding out the ports is a microSD card reader (but not an SD/SDHC card reader) and a port for connecting the provided networking adapter with RJ45 Gigabit LAN support. Of course, there’s a power port for DC power too.