In order to maintain a very clean appearance — Samsung is all about style, after all — the SyncMaster T220 does not have any controls on the front with the exception of a touch-sensitive power “button” near the bottom right. 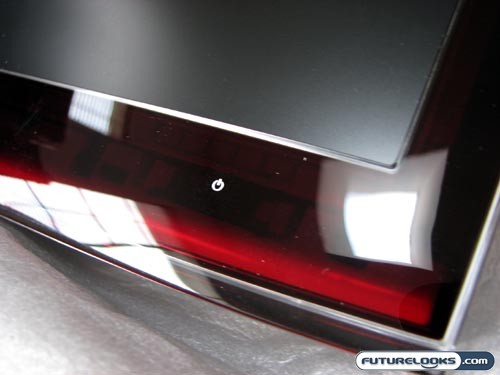 To access the on-screen menu for adjusting contrast, brightness, and orientation, you’ll need to use the buttons located along the right side of the monitor. It’s a little weird not being able to see the buttons as you change the settings, but that’s the price you pay for style. 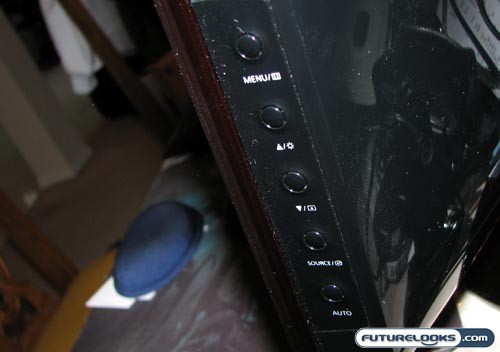 Although it might detract from the slick appearance, I think that I would prefer having the controls on the underside of the monitor with the labels on the front side in small font. This is largely a matter of personal preference and the having the labels on the front might take away from the cool chrome edging too. Six of one, half a dozen of the other. Samsung has used this sort of design for a while now in their HDTV line so if you own a Samsung LCD HDTV, you’ll probably already be used to this.

There’s no denying that Samsung knows what they’re doing when it comes to making aesthetically pleasing products. Their LCDs are just great to look at and the SyncMaster T220 is no exception. I’m digging the deep red finish and the chrome accents that run around around the perimeter just add to the appeal. 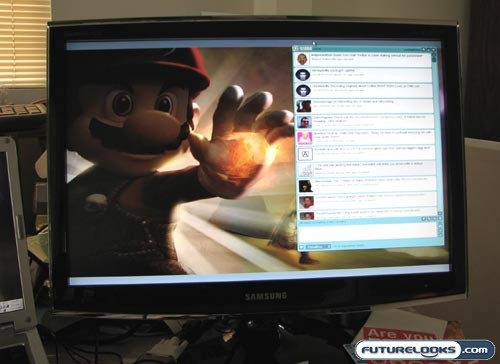 In terms of performance, I was perfectly satisfied with what the SyncMaster T220 has to offer. The 22-inch widescreen is a great size for most applications and, as I mentioned before, the color reproduction and contrast is very good. Watching videos and surfing the web is an absolute joy. No complaints on this end. Thanks to a 2 ms response time, playing games was also quite the experience, offering ghost free play. Frag away my friends.

Samsung also claims that the SyncMaster T220 is very energy efficient, having a standby power draw of just 0.3W. Did the real world live up to these claims? Well, a power meter told me that the SyncMaster T220 — when off — was drawing 2 watts of power. This might just be too low to measure, so it’s still possible that it only uses 0.3W. When on and under regular office use, the T220 had a 36 watt draw. When there was no input (scanning for input), the power draw balloons up to 49 watts. This could be because it is trying to read both the VGA and DVI inputs, effectively increasing the need for power. It would shut off the unused input once it figures out which one is in use.