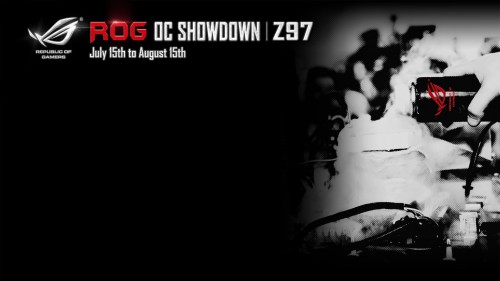 The summer of overclocking continues this year with another brand exclusive contest. ASUS is calling their troops to arms with the Republic of Gamers Showdown Online Overclocking Competition. If you are not already a member and think you have the overclocking chops, now is the time to join.

This year’s Republic of Gamers competition will be fought in three different arenas between July 15th to August 15th. These arenas are Maximum CPU frequency, SuperPi 32M, and 3DMark Sky Diver. Win a round and get your choice of any ROG Maximus VII series motherboard or ROG Matrix R9 290X graphics card. First runner-up will get their choice of a Maximus VII Formula or Maximus VII Impact motherboard. Keep in mind these prizes are awarded three times each.

Now if that didn’t get you to reach for the LN2 gloves, there are some bonus goodies as well. The grand prize for the person with the most points over the course of the three rounds is an ROG X99 motherboard (on release). And if you break a world record at any point in the showdown, you can take home $1000. Hurry and get over to main page for more details and to get started.

— Great prizes up for grabs for all owners of ASUS, ROG & TUF Z97 motherboards, in co-operation with HWBot.org —

15th July, 2014 – ASUS Republic of Gamers (ROG) today launched its ROG OC Showdown online overclocking competition in co-operation with HWBot.org. Any overclocker using ASUS, ROG or TUF Z97 motherboards can enter. The competition will run for one month between July 15th, 2014 to August 15th, 2014, with the grand prize of a future ROG X99 motherboard. Additionally, there is a prize of $1,000 for any world record broken by the end of the competition.

The competition will focus on three areas for benchmarking:

For any world record broken in the three benchmarks by the final event date, ASUS will additionally award a prize of USD $1,000.

For further competition details, rules and regulations or to register to join, please visit the competition page: http://hwbot.org/competition/rogocshowdown_z97