Most netbooks are less expensive than larger laptop computers, but many of us may still be deterred by the price of certain desirable netbooks. There are a fair number of them out there that retail in the $400 to $600 range and this is creeping too close to the range of a “real” notebook. Wouldn’t it be nice if you could have that portable Internet-surfing device on a more modest budget? With the Acer Aspire One, you can. There are configurations of the Aspire One that sell for $400 or more, but if you look to the lower end of the range, there are more affordable options as well. 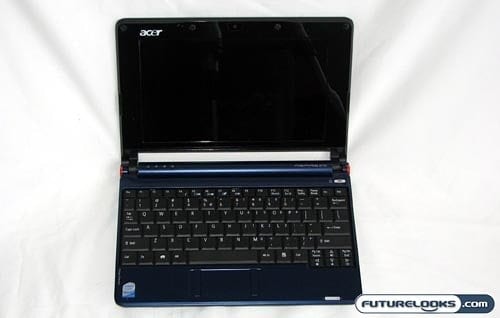 Saving even more money, you may want to consider the refurbished route by picking up the less expensive Acer Aspire One AOA 110-1722 which is sold by Geeks.com. As you may recall, I had a look at some other refurbished products from Geeks in the past, including some really affordable digital cameras and a debranded HP LCD monitor. They also have an extensive selection of refurbished laptop computers.

Based on the “bang for your buck” factor, the refurbished cameras and monitor seemed to provide an excellent value. Somehow, I suspected that the refurbished Acer Aspire One will be much the same. 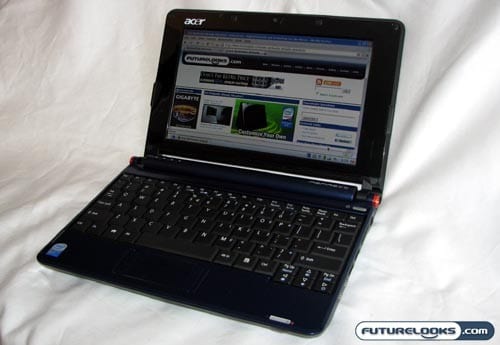 As mentioned, there are several configurations available for the Acer Aspire One, so my impressions are based only on the version that I was provided to review. The model number is the Aspire One AOA 110-1722. Since the reconditioned version from Geeks.com sells for just $250, it is not at all surprising that the specs are nowhere near as impressive as those found on the MSI Wind U100 and Asus Eee PC 1000HA, both of which sell for $400 or more.

In terms of the key features and specifications, the Acer Aspire One AOA 110-1722 netbook comes equipped with the following:

Aside from the marginally smaller screen, the two biggest differences between this netbook and its more expensive counterparts are that it only has 8GB of internal flash memory (others have 80GB, 120GB or 160GB hard drives) and it runs on Linpus Linux (others usually have Windows XP). The latter can be addressed with your own installation of Windows using an external optical drive.

Is it the Packaging That Makes it Refurbished?

Compared to some of the more trendy devices on the market, the box for the refurbished Acer Aspire One is decidedly understated. It’s a plain brown cardboard, lacking in any sort of personality whatsoever. Aside from the splash of Acer green on the sides, it really doesn’t do much in terms of helping to sell the product. You are buying this online, so there’s no need for the box itself to have any buyer appeal. 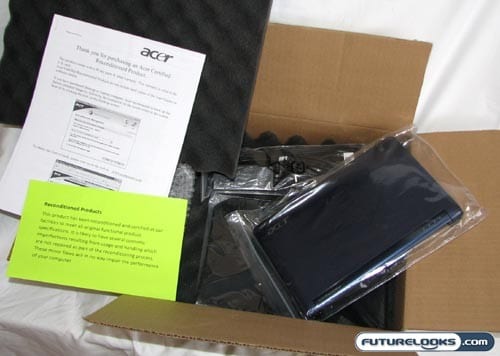 That said, I was quite pleased to see that the contents of the box were well protected with soft foam inserts rather than with the standard Styrofoam that you find everywhere else. Since you don’t get any formed Styrofoam, however, the contents of the box are all jumbled together in the middle. I’d imagine that a new Aspire One is a little more organized, in this respect, but it’s not really something that matters all that much.