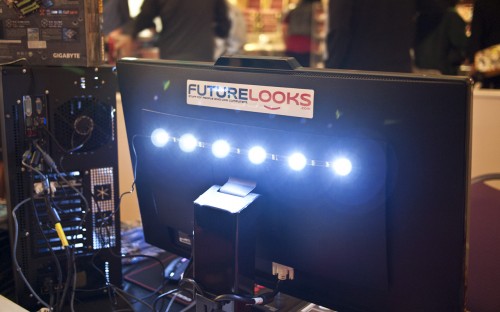 This weekend Futurelooks was out at the Vancouver Gaming Expo, which is the close cousin to the Vancouver Retro Gaming Expo which took place back in March. Because of the huge success of the first event, the organizers decided to create another event that celebrated more modern gaming and combined vendors, fun tournaments, educational panels, a bit of cosplay, and a charity auction all in one. The proceeds of the auction went to the excellent Child’s Play and the local BC Children’s hospital.

The event took place at the Columbia Theatre in New Westminster, which gave organizers access to a unique licensed venue. So when the all ages crowd dispersed, the adults would be able to enjoy some old-school music and a little nerd burlesque in the evening. Futurelooks was on hand to support PC Gaming with help from our friends from ANTEC, Kingston Technology and GIGABYTE.

In order to give gamers the best possible PC gaming experience, Futurelooks featured two gaming rigs that attendees were able to enjoy all weekend. Check out the video tour below…

Although our ANTEC P280 system with the Core i7 3770K and NVIDIA GTX 690 was the star of the show, the smaller ANTEC ISK 300 system really created quite a bit of interest, especially from LAN gamers. With great mini ITX boards like the GIGABYTE Z77N-WiFi mini ITX starting to hit the market at reasonable prices of under $150 US, as well as fast SSDs like the HyperX series from Kingston hitting record low prices, we’ll definitely see more people building smaller, more powerful systems. There really isn’t much compromise today, unless you want to shove a GTX 690 “on to” one.

While we were manning the mighty bastion of PC gaming, console gamers were also well taken care of with free play consoles and tournaments that featured Street Fighter IV, Super Smash Bros, Halo 4 and more. There was even drunken “Dr Mario” and “Tetris” thanks to the licensed venue. 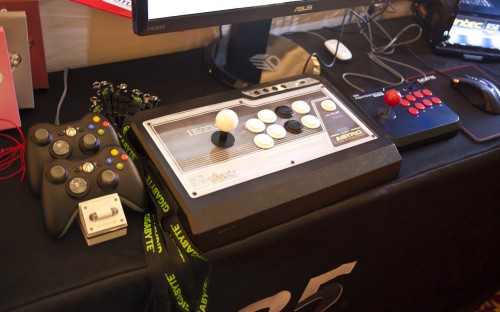 To bridge the gap between console and PC, Canadian Joysticks lent us a couple of their fighting sticks that kept fighting game fans busy at our systems throughout the weekend, pummelling each other on Street Fighter IV. They distribute the Qanba joysticks that work on PC, PS3 and Xbox 360 which is a very unique feature considering other companies make you buy a stick for each console. They were super solid sticks that take a beating and really keep on ticking.

In fact, the stick you see in the picture has been hammered on for 2 years straight according to the folks at Canadian Joysticks. I know that Michael from MEGATechNews.com is a huge fighting game fan. If only those guys would just cough one up and send it to him for a full review. Then he could truly verify that claim.

We also gave away lots of swag items from GIGABYTE which included great looking lanyards and some limited edition motherboard key chains that look like the Z77X-UP7 board with its orange and black motif. ANTEC also gave away T-shirts and PC tools to the truly hardcore PC gamers that stopped by our area to chat, and everyone got a sample of their amazing electronic display cleaning products, perfect for that smartphone, tablet, and those glasses that we all have to wear now because we sit to close to the screen too often.

Everyone loves a great deal and I’m sure many of you love to support charity. That’s what made the charity auction great at the Vancouver Gaming Expo because you could do both! 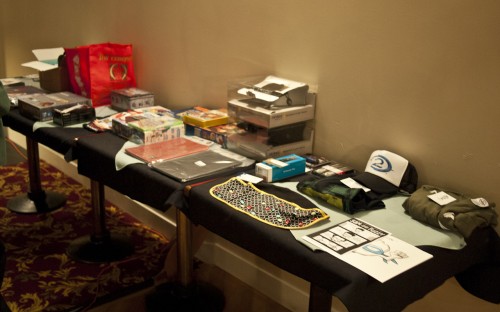 Futurelooks encouraged GIGABYTE and Kingston Technology to donate some amazing auction items and they did just that. GIGABYTE stepped up with a G1.Killer Sniper M3 motherboard and a Force M3 Wireless Mouse.  Kingston also came up with some great auction donations too which included one of my personal favourite, the HyperX USB 3.0 64GB flash drive and a rock solid HyperX Genesis 8GB 1600MHz DDR3 Memory Kit. ANTEC  came in as well with a couple of notebook coolers.

Many other great auction items were donated by other companies including Crumpler, Sam and Fuzzy and more. But I was particularly fascinated with the mini-apron with the three pockets because it provided spots for your PS3, Xbox 360 and Wii Controllers. There was definitely something for every gamer at this auction.

With the help of all the donations, the auction raised over $600 for charity and the auction winners were extremely happy with their auction winnings by scoring some major deals. If you weren’t there bright and early, you definitely missed out. 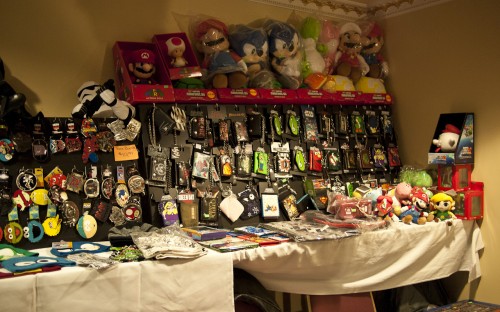 Events like these provide gamers with an opportunity to purchase merchandise from specialized vendors that understand gamers. There was a wide range of retro console games and systems for sale, gamer related crafts, even gamer related chocolates and cupcakes. Of course, the more conventional items like hats, t-shirts, and plush toys from your favourite games were available for purchase so you can complete that gamer themed couch cushion collection. There was definitely something for everyone…except comic book folks, which we found slightly odd.

A Great Weekend For Gamers

Anytime that the large community of gamers in the Greater Vancouver Area have an opportunity to come together is a great thing. We were really impressed with what we saw at the Vancouver Gaming Expo in its first year, and we hope to see this event grow. It offered something for everyone from retro gamers, to console gamers, to PC gamers and of course, something for people of all ages from Nerd Burlesque to Pokemon. We can’t wait to see what next year’s event has in store and we hope to come back with an even greater PC gaming presence.

For more information on the Vancouver Gaming Expo and the Vancouver Retro Gaming Expo, please check out their home page.  We’ll see you at the next event and please enjoy the photo gallery below. Our partners in crime over at MEGATechNews also have a gallery posted on their Facebook Page.