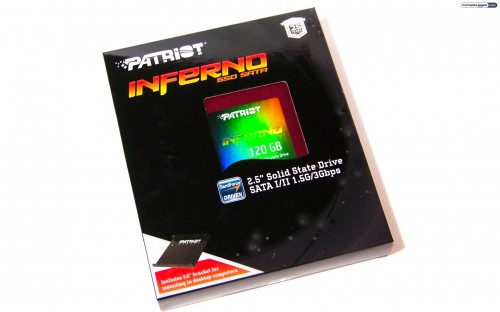 Compared to about 18 months ago, solid state drives have come down roughly $100 USD making them more affordable. They’re still one of the best upgrades out there. If your current system has been dragging its feet, an SSD is an easy way to speed it up. However, it can get confusing trying to figure out which ones offer the best value and performance as prices depend upon things like the controller and the capacity. Today, we’re looking at the Patriot Memory Inferno 120GB SSD which uses the SandForce SF-1222 controller, which is the fastest controller for consumer SSDs. Let’s have  look and see if that’s true.

Patriot’s Inferno series is their flag ship SSD line. It comes in a very nice burgundy colored anodized brushed aluminum enclosure. Inside, the drive is Intel flash NAND populating the small PCB. It’s on that same PCB that you’ll find the more affordable SandForce SF-1222 controller. The model we’re looking at is the PL120GS25SSDR. It’s rated up to 285MB/s read and 275MB/s write. These are typical average sequential speeds. The 120GB model is rated at 4K Random Write IOPS up to 14K and 4K Random Read IOPS up to 5K with up to 14K write and read transfer rates. The Inferno series also supports TRIM which is very important for keeping the SSD performing at its best. That’s important since this series utilizes MLC (multi-level cell) NAND. Without TRIM, the drive can start to slow down with use over time.

In terms of price, the Patriot Memory Inferno 120GB SSD will cost around $245 USD and comes with a three year warranty.  Now that we’re all properly versed on the Inferno SSD series, lets get testing. 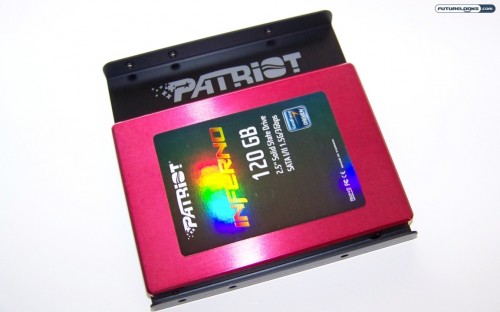 Our test system is based on an X58 platform and the Patriot Memory Inferno will be tested along with a few other SSDs of comparable size using various controllers. Here’s the breakdown:

This test bed will compare a SandForce, Indilinx, Toshiba, and Intel controllers. These are all basically the best bang for buck choices available at this particular capacity and price. Keep in mind that the TorqX series has been discontinued and replaced by the Inferno series so we will be able to see if there are any performance differences.

SSDs can influence a system’s performance based on its transfer rates, or read and write times. CrystalDiskMark is a good free test program that will test each SSD’s ability and provide some real world numbers. The same applies to Argus Monitor, which is more thorough in testing a storage device’s performance while providing a great deal of detailed device information including whether or not supported features are operating properly as well as whether or not the storage device is failing. Ultimately, the higher the numbers, the quicker and more responsive your system will be.

Then, we’ll look at how that applies to each SSD by doing a large file timed transfer test. The file is filled with roughly 10GB of data consisting of both videos, music, and office applications. A Seagate Barracuda XT 2TB platter drive will thrown in so you can see where it rates in comparison.

Since it’s very easy to fill 100-120GB SSDs to half capacity in no time, each one was loaded down and tested to see how it will perform. The weaker the controller, the slower the SSD becomes as it has to manage space more aggressively. 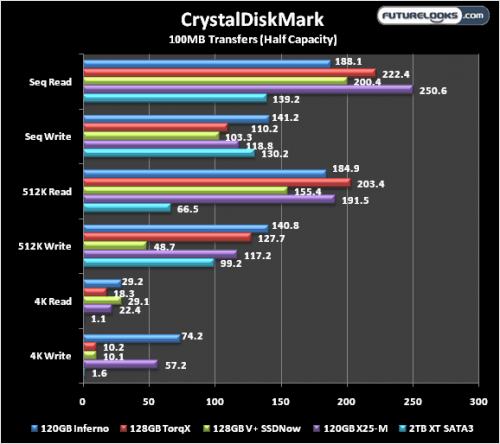 At half capacity, not much happened in performance. Scores were within 5% with all the SSDs. The Intel SSD fared the best of all of them in sequential read but not in write. In the 4K tests, the X25-M drops just behind the faster Inferno. The SandForce controller is just a bit more efficient handling 4K data blocks that bring the others to somewhat a crawl in comparison. All the SSDs are faster than our platter based drive.