The recent release of ANTEC’s P280 chassis has given us hope that the company would finally find its way again in the performance computing market. The other area that the company has been sorely lacking in is the gaming market. While the ANTEC Nine Hundred and Twelve Hundred cases have served the company well, the designs have become dated by today’s standards. While the Dark Fleet (DF) series was supposed to carry on the success, the whole armada took a nose dive. That’s why we’re hopeful that the new Eleven Hundred Gaming Chassis presented in FULL HD in the video above (or watch it on YouTube), will help launch ANTEC’s next 25 years with the force they need to stay with the pack.

It’s What’s On The Inside That Counts 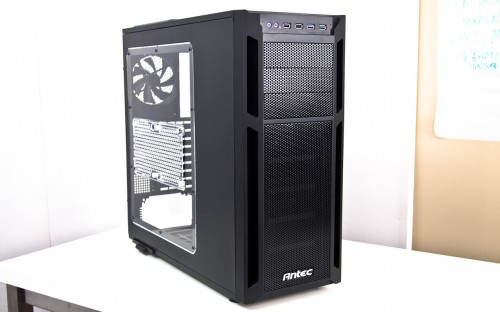 The new ANTEC Eleven Hundred shares many similarities to the recently launched P280 Performance Chassis but is customized to meet the needs of gamers more than for quiet computing. For starters, the Eleven Hundred trades in its aluminum and plastic side panels for steel ones. The main panel sports a plexiglass panel with two fan mounts while the back one is bowed out to accept the additional cables needed by large power supplies and Quad SLI gaming systems. There is even a fitting for a single 120mm fan to increase air flow to the back of the motherboard.

One other main difference is the lack of a front door that the P280 has. The Eleven Hundred is instead clad in mesh and a couple of massive vent holes draw in air from the left, right and bottom of the front panel. An easy to use fan filter is on the backside of the front panel, which snaps off very easily without damage.

Instead of making 2.5 inch drives an after thought, the Eleven Hundred has two fittings for a couple of SSDs or notebook drives. While there is enough friction to mount them without screws, you can secure them with a single one. If 3.5 inch drives are more your thing, you can mount up to six of them using drive rails included in the box. They are easy to use and provide a very secure, rattle-free, installation.

One quick thing that is different about the P280 is the fact that it is one of the first ANTEC cases to come with a new fan bus features that allows you to plug in up to four case fans with 3 or 4 pin connectors, into a centralized connector located at the top of the case. It uses a standard 4 pin MOLEX to power the four fans, leaving motherboard headers free to power other fans. You’re going to need them because you can mount up to four fans in front of and behind the drive bays plus the two extra ones on the side panel to blow over your video cards.

Finally, the ANTEC is a Super Mid-Tower and it’s super because it’s one of few smaller cases that can carry an XL-ATX motherboard inside. This is usually Full Tower territory and its great to see this option available.

The ANTEC Eleven Hundred launches on November 22, 2011 and will go on sale for $129.99 US. We’ll have a full review of this case up covering the installation, temperatures and noise levels once we get a system built inside. Stay tuned!

UPDATE: Our full review is posted!

Help Us Improve Our Videos and Previews By Leaving a Comment Below!