Argus is a new benchmark utility that we’re using. It gives us quite a bit of detailed storage information including performance numbers. It offers Read Transfer, Sequential Read/Write results in MB/s right down to the 4KB data block numbers, latencies, and firmware info. 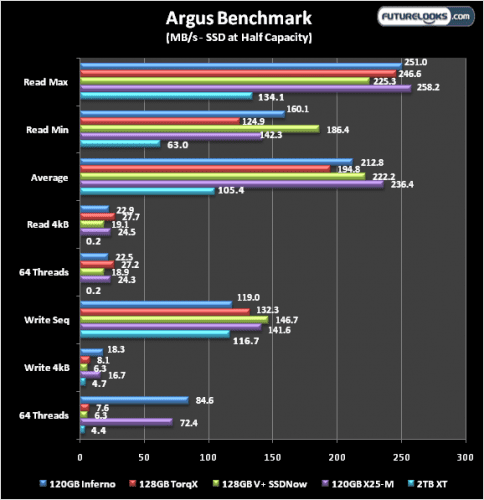 First, we’re happy to say that the log file showed no errors which indicate properly functioning drives. After the benchmarks finish, the Inferno remains in 2nd place in the sequential tests, though not by a lot. The X25-M falls behind in the 64-Thread tests. The SandForce 1222 controller reveals its a formidable manager of MLC (multi-level cell) SSDs.

An unzipped 20GB file containing a movie, songs, pictures, graphs, and office apps is transferred to and from each SSD. Obviously a zipped file would have been faster but we wanted to see how each SSD’s controller managed files of varying sizes. 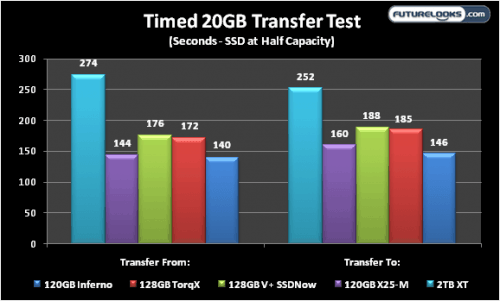 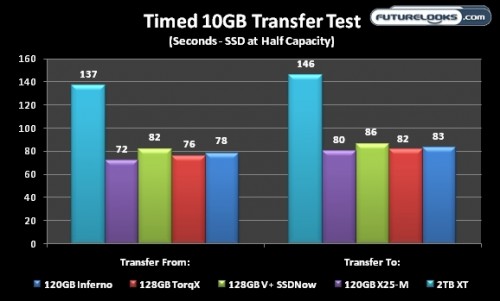 It’s interesting to see that the SSDs aren’t separated by a whole lot of time. There were points in the time trial that it looked like the X25-M was going to out pace the Inferno. But, as the controllers continued to be bombarded with the 4K data, the Inferno pulled away. An interesting note is that the SSDs were all very close when it was only a 10GB file. Some times, controllers won’t make much of a difference unless the controllers are completely swamped. 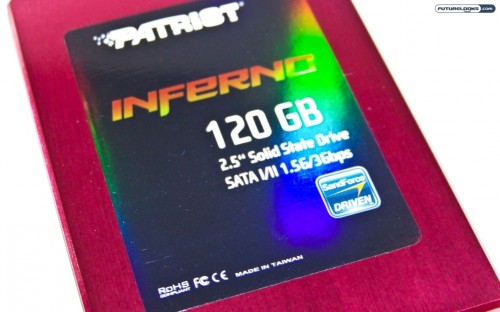 As long as the firmware is up to date and drivers are running properly, SandForce is still the ideal controller for users who want optimal performance without spending too darn much money. Our testing revealed Patriot’s Inferno 120GB SSD is as good or ever so slightly better than the Intel X25-M for all basic desktop purpose. Applications are quick to snap-to-attention especially when pushing some larger files and programs.

Is the it the optimal controller for handling years of use? It’s really hard to say based on the limited time we’ve had to run them all. We unfortunately don’t have the 3 years or more necessary to wait and see. But, we can say that it continues to run pretty lean even at half capacity. Users aren’t going to pack these drives with much more than their primary applications or favorite game, leaving the heavy lifting for larger, cheaper platters.

Overall, the Patriot Inferno series is a great choice and comes in at a reasonable $245 US for the 120GB capacity. This is competitive with other SandForce based SSDs and performs well in comparison. We recommend this to anyone looking for a good value performance system upgrade.