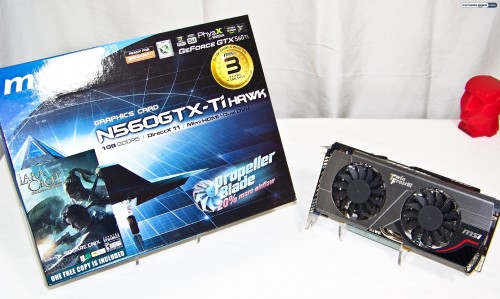 MSI makes many different versions of their video cards. Some include their entry level Cyclone(II) cooler and minor tweaks while at the very top, there is the Lightning series which has many tweaks. Somewhere in the middle is where the “Hawk” makes its nest. MSI offers options for both AMD and NVIDIA fans at different performance levels to suit the budget and today we’ll be checking out their MSI N560GTX-Ti Hawk Edition based on the  nVidia GTX 560 Ti GPU. We recognized the GPU as one of the best bang for buck graphics accelerators on the market. But what makes the Hawk so special? Read on and you’ll find out! 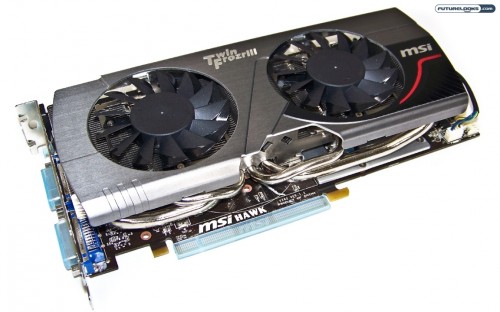 When you buy an MSI Hawk series video card, you’re getting higher clock frequencies and better components which is part of their “Military Class” standard. The result is a factory clocked (not overclocked) video card using some of the best GPUs in the bin. It creates a lean, mean, graphics rendering machine. The video below gives you our quick introduction of the HAWK series and what makes this different than their also impressive Twin Frozr II based version…

Sure, the GTX 560 Ti Hawk offers all of the latest NVIDIA visual features. But, it’s the higher GPU core and memory frequencies that separate it from the usual competition. It’s the Hawk Edition’s ability to overclock with additional voltage control that truly sets it apart. Taking it further are small voltage tuning leads for those that might be so included to do some extreme overclocking using LN2. Otherwise, higher temps caused by regular overclocking is kept under control with the revised heat pipes and cooler. Here’s how the HAWK stacks up to regular cards… 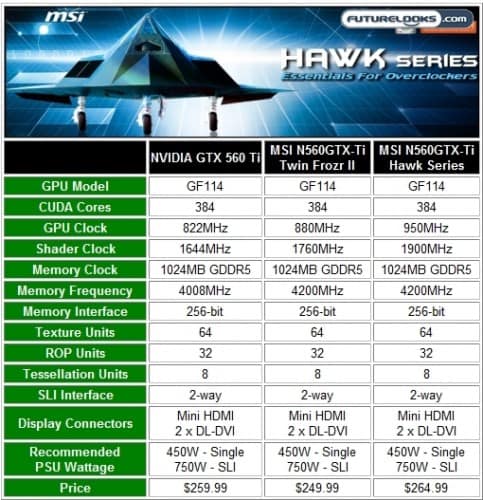 While you can’t easily tell the Hawk edition is fast just by looking at it, the frequency specifications make it obvious that it’s not just your regular GTX 560 Ti. The current pricing of the cards in the table also gives one cause to seriously consider the faster Hawk series over regular versions. At $264.99 US, that’s less than a $20 increase over its slightly slower sibling. Testing will tell us if that’s worth the extra cash.

The test system is similar to our original GTX 560 Ti launch review, but has one change. We pulled the MSI P67A-GD65 motherboard to swap out with the B3 revision. Unfortunately, we haven’t been able to obtain a replacement under warranty. Thus, we’ll be using an ASUS SaberTooth P67 B3 motherboard for today’s review process. Here’s the breakdown of the other components:

In this comparison, only the GTX 560 Ti cards were overclocked to see where the frequencies top out. You should understand that as your overclock your own video card, there is a risk of damaging your card. You also create more heat and noise in your system. Make sure you have plenty of cooling to start. Your results may vary. Let’s cook some GPUs!