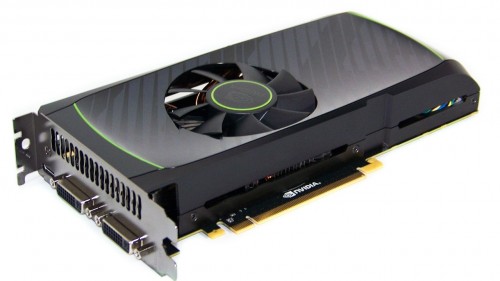 Fermi has grown up pretty quickly. First, the hot headed GF101/102 came and as the GTX 480/470, many jokes about frying eggs evolved. Then, the GF104 gave us the GTX 460; a card that really hit the gaming sweet spot in terms of price and performance. Then brought the scaled up GF110 which firmly secured the GTX 580 as the most powerful single GPU video card solution today. But nVidia wasn’t done!

The work continues as NVIDIA’s engineers continue refining the Fermi architecture and the latest GF114 GPU aka the GTX 560Ti is about to make the gamers’ sweet spot even sweeter. The “Ti”? Well, it has nothing to do with the old school GeForce 3 and 4 Ti series, but it does represent what this new GPU is all about: Lighter, stronger, faster just like the metal!

GeForce GTX560 Ti Features and Specifications: The Target is Set!

The new GPU updates have positioned the GTX 560 Ti as the optimal choice for gamers who want performance using a 1920 x 1200 resolution with some AF/AA settings turned up. Gamers using the average 1680 x 1050 resolution should find this extremely appealing if you’ve waited to upgrade and want to crank the settings up without spending a pile of cash. NVIDIA touts this as the GPU worth pairing up in SLI thanks to it’s new optimizations. In fact, a pair of these should rival the GTX 580, but that’s an article for another day. But the real target is the more expensive AMD RADEON HD 6950 which enjoyed a very short moment at the top of the podium in this price range. 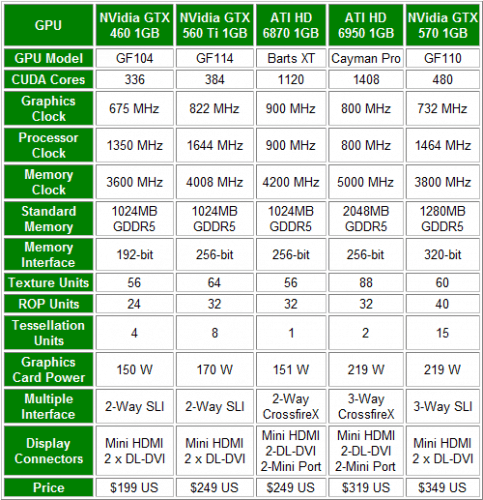 To achieve the targets set for the GTX 560 Ti, NVIDIA took the previous GF104 GPU found in the successful GTX 460 and refined it. By balancing things like transistor paths, engineers were able to improve power efficiency and thermal output resulting in a much higher clocked GPU known as the GF114. With plenty of overclocking headroom leftover with its modest 822 MHz stock clock and all 384 CUDA cores enabled, this card is definitely ready to go for broke. The best part is that it does all this at only an extra 20Watts of power over GTX 460 which translates into a modest increase to a 500W minimum power requirement over the 450W requirement of the GTX 460 GPUs. Overclockers may choose to go 600Watts or greater.

Since the GTX 460 (GF104) continues to be a great asset amongst budget gamers, NVIDIA is not replacing it with the GTX 560 Ti (GF114). Instead, you’ll still be able to buy the GTX 460 for some time which is great news if you’ve been considering adding a second card for SLI or Physx. As the GTX 470/480 cards continue to disappear, the GTX 560 Ti will help fill the performance gap left behind just under the GTX 570 (GF110).

Suggested pricing for the GTX 560-Ti starts around $249 USD. Higher clocked cards will reach the $289 depending on the vendor. Unfortunately, GTX 460 prices probably aren’t going to drop much if any. It still averages $189 US for a standard 1GB (non-SE) card depending on the cooling solution and clocks.

The NVIDIA GTX 560 Ti has really pushed partners to get creative with their own variations of coolers and clock frequencies in hopes of gaining your hard earned money. Some vendors are launching stock cards using NVIDIA reference coolers which do the job just fine as you’ll see later on in testing. However, some manufacturers like MSI and ZOTAC have decided to provide better cooling right out of the gate skipping the reference cooler.

MSI will be shipping their N560GTX-Ti cards fitted with their Twin FrozrII GPU coolers with stock frequencies (see an unboxing above of this card). They also have models that step up their Ti series with their Twin FrozrII OC and SOC editions reach GPU core frequencies of 880 MHz which all but guarantees breaking the 900 MHz with minimal effort. They also return with their highly coveted Golden Edition offering the best of everything you could want in a card. Could they return with a GTX 580 Ti Hawk edition? We can only hope!

ASUS also puts some serious effort in to their own cards as well with the DirectCU II cooling. If you think back to our recent CES 2011 trip, their jedi-like component marketing manager gave us a sneak peak at the SAP Initiative. Under the SAP Initiative, ASUS will be releasing specially branded motherboards and video cards that push frequencies in to new territory. You can be sure that something sweet is being boxed up for shipping.

Finally, GIGABYTE bust out of the gate also offering a wide range of cards using their new WINDFORCE GPU coolers from stock to Super Overclocked cards. The GIGABYTE Super Overclock GTX 560 Ti is the only card at launch to hit 1GHz core from the stock 822 MHz. Pricing for this and other cards clocked in this range should hit the $279+ US range.