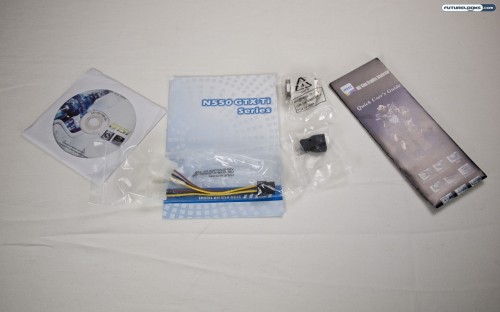 Bundle expectations at this price point are fairly low. We did appreciate the mini-HDMI to HDMI adapter that came with bundled with our sample (the black thing in the picture) along with a VGA to DVI adapter. Other things included with this bundle are the user manual, quick start guide, and driver DVD. A 6 pin PCI-E to 4 pin MOLEX x 2 adapter is also included if you are using an older PSU that meets the minimum requirements.

Overall there’s nothing to get really excited about, but if you are able to snag one with the bundled games (usually added by the seller as printed codes) then that really makes this card a lot more fun out of the box.

The $200 US price point for graphics cards represents a need for systems that are a good mix of value and performance. This is a market that AMD has taken care of very well with their Phenom II Black Edition CPUs and accompanying partner boards. We’ve stuck to an AMD platform for this reason and the system includes the following components.

With DDR3 memory being fairly inexpensive, we of course loaded up the slots. We already know that excessive amounts of memory do nothing for gaming and should not have an effect on the big picture we’re trying get from the results. All of our components were installed in an open test bench (High Speed PC Top Deck Tech Station).

Overall the system does a pretty good job of representing the target market for the $200 GPU market.

All of our tests were conducted using the latest available drivers and BIOS revisions. As of the date of this article, we are running ATI Catalyst 11.2 drivers for the HD 6850. The GTX 460 768MB gets run with the latest 266.58 drivers and the N550GTX-Ti gets connected with the 267.59 drivers.

Unless otherwise stated, benchmarks will be performed using default settings with Vsync off and at least 4x AA. We use an HD gaming resolution of 1920×1080 for all tests that do not have a preset. Please see each test for specific modifications if any. Let’s get cracking!

MSI has given enthusiasts a real gift with their Afterburner software. We really enjoy using their software and if we can give MSI any extra marks it would be for this software. While the software is fully capable of jacking voltages with an MSI GPU, we decided to keep voltage stock and overclocked for 100% stabilty. This means that we may not see as high of an overclock overall, but we will be assured that we cannot blame the card for issues. 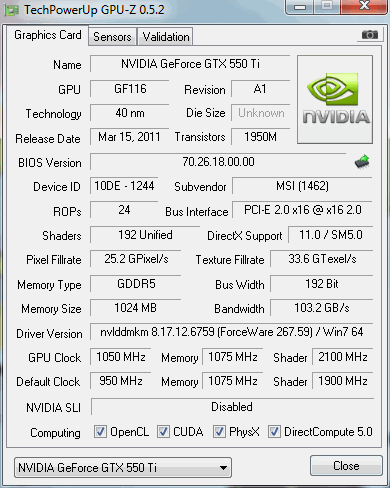 After all was said and done, we managed to get another 100MHz out of our N550GTX-Ti OC Edition bringing it from the already overclocked 950MHz core clock to 1050MHz core clock. In order for us to put this number down as our official number, it needed to pass testing with every single one of our benchmarks. That meant a lot of retesting for us, but at least we’re not throwing out some unstable number and getting your hopes up.

Of course, mileage will vary with overclocking any hardware and you may be able to get even higher clocks by tweaking the voltage. Now let’s get on with our benchmarks starting with the synthetic stuff.