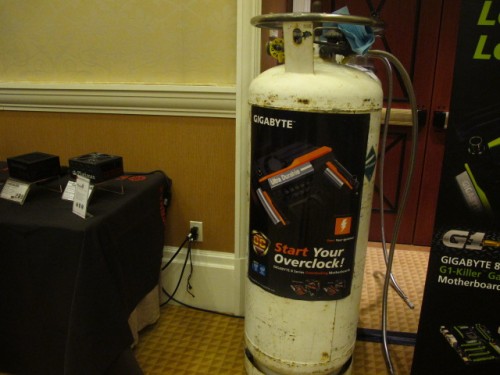 What is more fun than an overclocking event? An overclocking event in Las Vegas during CES 2014, complete with world-renowned Overclockers like Hicookie and Dinos22. The centerpiece of this event is the GIGABYTE Z87X-OC designed from the ground up for overclocking. We had a chance to review this board recently and it’s quite a beast.

If you are in Vegas and interested in watching the madness of people going after the world overclocking records, then you need to be at Caesar’s Palace Octavius Ballroom 6 & 7 now. It will give you some time to take a break from all that walking around to see all the new goodies while watch those new goodies in action and pushed to the limit. As you can see in the photo below, Stephen and Michael were on the scene so expect to see some coverage on something new from GIGABYTE soon. 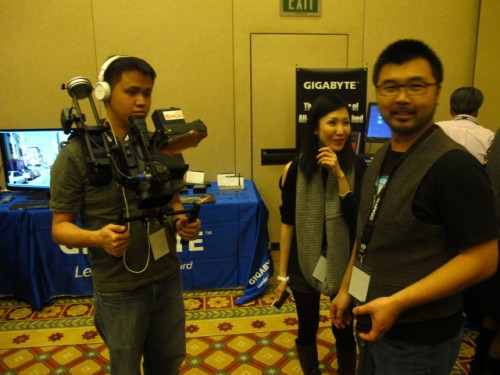 GIGABYTE also invited Intel, G.skill, and Enermax as co-hosts to ensure the best overclocking tools were available. Don’t sit too close though. I heard that LN2 can be really cold to the touch.

We’ve got some photos from the event attached below (refresh for new ones) and stay tuned for more CES 2014 from Futurelooks all week.

City of Industry, California, January 3rd, 2014 – GIGABYTE TECHNOLOGY Co. Ltd., a leading manufacturer of motherboards and graphics cards announces its attendance at CES 2014, teaming up with Intel, G.SKILL and Enermax to host the 2014 CES Extreme Overclock event, also demonstrating a range of the latest enthusiast motherboards and systems.

Join GIGABYTE during CES 2104 at the Caesar’s Palace Conference Center, Las Vegas from January 6th, 2014 where a GIGABYTE Overclocking team led by renowned Overclockers Hicookie and Dinos22 will be joined by other world class talent from around the globe, demonstrating all the skills and experience need to break world records on a GIGABYTE Z87X-OC motherboard.

“We are really excited about hosting some of the world’s top Overclockers in Las Vegas,” commented Hicookie, Chief Overclocking Evangelist, GIGABYTE Motherboard Business Unit. “It promises to be a fantastic OC showcase event, one that underlines our commitment to extreme overclocking and the development of world-class overclocking motherboards like the Z87X-OC.”

Intel® – As a world leader in computer innovation, and the biggest manufacturer of PC processors, event sponsor Intel® will supply a different kind of chips to those which you would usually associate with Las Vegas in the form of 4th generation Intel® Core™ i7 processors.

Enermax – As a leading designer and manufacturer of high-performance power supplies, Enermax is a keen supporter of Overclocking and a valued event sponsor.