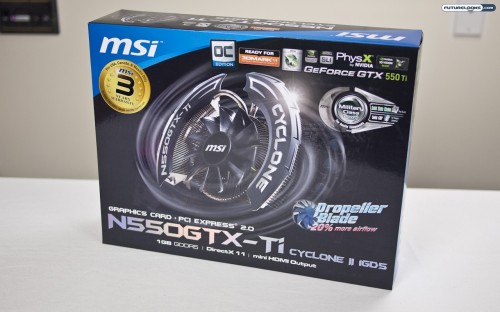 Everyone loves the way a high-end graphics card plays games, destroys benchmarks, and makes you the envy of every LAN party. While we appreciate top end hardware most of us are only willing to pay bottom dollar to play the hottest games. That’s why nVidia has been trying to hard to win over gamers at the $200 US sweet spot. First they gave us the GTX 460. Now they’ve got a new GPU at around $150 US that uses less power while giving you decent performance. They call it the GTX 550 Ti and today we’ll be looking at the MSI version known as the N550GTX-Ti Cyclone II 1GB5 OC.

The new GTX 550 Ti GPU is sort of a replacement for the original GTS 450 GPU released just a few months ago. Here’s what the family looks like with this latest addition.

As far as specifications go, you can see that the GTX 550 Ti really is stuck between two siblings. The GTX 550 Ti has a wider memory bus than the GTS 450 and a new GF116 GPU that allows the card to run with lower power and with different sized memory blocks. Usually, a 192 bit memory bus card would need to run 768MB or 1.5GB or memory. But to get that magical 1GB onboard, the new logic on the chip allows for uneven blocks. This allows nVidia to get more creative with memory configurations and decrease price for performance. The new GPU also allows higher clock speeds and more memory at a lower price than the upper end GTX 460 768MB, but with fewer CUDA cores.

With $20 separating the GTX 550 Ti from its siblings, the new card really shakes things up. Will the newer GF116 core and the higher clock speed be a factor? Hopefully we’ll be able to answer that in the benchmarks.

Suggested MSRPs don’t always reflect what is happening in the real world. And this review wouldn’t serve as good consumer advice unless we looked at what you can buy for your hard earned dollar today. Here’s how the GTX 550 Ti stacks up against other options.

We think that the real battle for the GTX 550 Ti is between the GTX 460 768MB and the HD 6850. This is the comparison we will be emphasizing to give you a definitive answer as to whether the new kid on the block is a knock out or a miss. 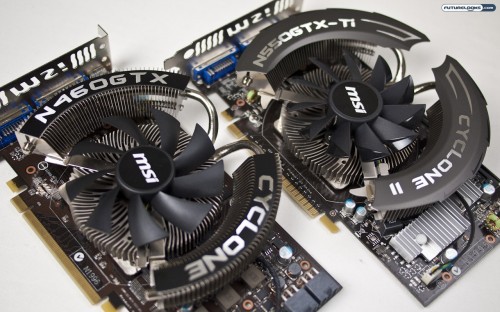 MSI’s Cyclone cooler isn’t the prettiest thing on the block, but it works really well. The N550GTX-Ti (right) returns with the latest iteration of this cooler known as the Cyclone II. As you can see, the Cyclone cooler on the N460GTX looks very similar to the Cyclone II on the N550GTX-Ti. However, there are two notable tweaks that MSI claims decreases noise and increases cooling performance.

The first change is the fan profile. They’ve retuned the fan blades to work more efficiently and decrease noise. The fan works in conjunction with a redesigned heatsink cover that better distributes are across the face of the card, aiding in overall cooling performance. MSI has also added a heatsink to power components to further reduce temperatures when using their excellent Afterburner software to overclock. 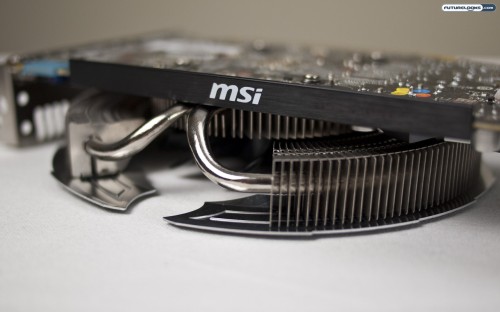 MSI retains all the nice branding touches like the cut outs in the PCI bracket, branded covers that protect the connectors, and a new metal bridge that sits at the top of the PCB that enhances rigidity. Because the Cyclone II is mainly centred on the GPU, unlike a full length cooler, I did notice wiggle in the original Cyclone and this has been addressed.

For $154.99 US, MSI is $5 over the MSRP set by nVidia. However, you do get a card that is overclocked from the stock 900MHz to 950MHz out of the box and you also get a 3 year warranty. For an extra $5, that definitely sounds like it’s worth it. Especially since many retailers are offering an extra game or two to get you started.