Search
Home
Reviews
Prev3 of 9Next

The GIGABYTE board is definitely the most attractive of the trio and the middle child in terms of price at $139.99US. This company has definitely come a long way in terms of color coordination and the blue and white motif definitely works well together; a far cry from the “LEGO Brick” color scheme that the company was plagued with not too long ago. The board’s layout is logical and the the cooling solution is definitely impressive with large aluminum heatsinks and a heatpipe tying it together. Coupled with GIGABYTE’s Ultra Durable 3 technology which includes a 2oz copper PCB and a full complement of solid Japanese capacitors, the board definitely accounts for its extra weight on the scale a feeling of durability.

Unique to the board is GIGABYTE’s 3X power technology which supplies the USB ports extra power to give devices like power hungry USB hard drives and even iPads, extra juice. This means that USB splitters are no longer required to power up your arsenal of USB devices. Among other features are GIGABYTE’s Easy Energy Saver which combines software and hardware to auto adjust power requirements. Taking it a step further, GIGABYTE also has software called Auto Green that, when coupled with a Bluetooth adapter and a Bluetooth enabled cellphone, can put your system into standby and lock it down when you’re out of range, reducing power consumption further.

The board does lack the easy overclocking and core unlocking (hopefully coming in a new BIOS update) features of the MSI and ASUS. However, the BIOS overclocking options are no slouch thanks to the work that the company has done in perfecting it with the help of the best overclockers in the world. It’s definitely a board with with a mild manner but performance potential with the right skill. There’s also plenty of room for big coolers. There’s more info on the product page if you need more detailed specs. 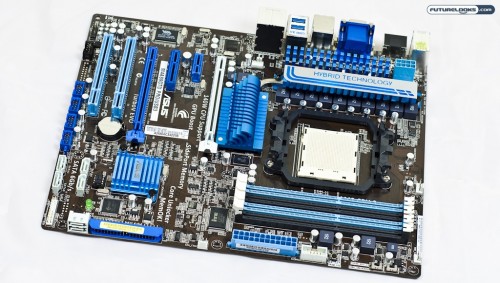 In this trio of boards, the ASUS is the most expensive. Clocking in at $149.99US, it earns the price premium by adding in the most number of features. While the board definitely isn’t as well built as the GIGABYTE, but far superior to the MSI, a number of innovative features make it worth the price premium. For example, the board offers a number of little features that make installation of components easier like the quick release PCI-E slots and the single sided memory slots (though it would have been nice if the clips were on the opposite side so they don’t but into a video card).

The ASUS’ Q-Connector also makes life easy, allowing you to pre-plug your front panel connections before plugging them into the board. I was just a little perplexed by the placement of the SATA connectors and why they couldn’t all be placed at a 90 degree angle, while ditching the IDE connector that no one uses anymore. You win some. You lose some. 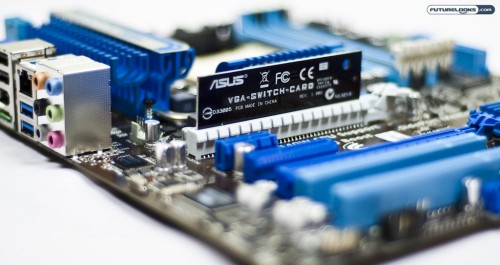 Speaking of odd, ASUS included this strange VGA switch card which you need to use if you want to use the far PCI-E slot as an x16 slot. Unplugging it turns the slot into an x8 PCI-E slot and allows you to plug in a second card for CrossFireX support. Also, you can’t use the top (light blue) slot as an x16 slot and plug card in the second slot. The card must be in this slot for the second slot to function at x16. Weird. 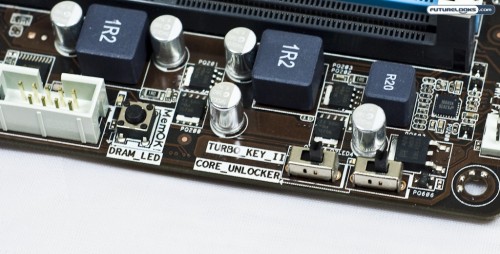 Finally, the ASUS was the first 890GX based board to offer hardware based core unlocking that is activated via a switch on the board (or Hot Key on the keyboard). Beside this same switch is the ASUS Turbo Key II which unleashes extra hardware based overclocking features. To the left of that is the life saving MemOK switch that takes memory that’s a little sketchy and at least gets you booted while you figure out the real settings.

In a nutshell, this board is stacked for tweaking and if you like to tweak, you’ll love this board. In fact, it’s almost overwhelming and this is just the hardware based stuff. ASUS has their own software suite for taking advantage of the hardware based overclocking features, kind of like AMD’s Overdrive, but made specifically to interface with their hardware. If you’re all about the specs, you can check in on the product page.

Now that we’ve had a chance to highlight some of the things that make each of the boards unique, let’s put some parts together and look at some performance numbers.