Search
Home
Reviews
Prev2 of 9Next

Before we dive straight in to what each board offers special to the 890GX party, let’s have a look at some of the variations (and similarities) that we can see. AMD has given manufacturers some leeway in some of the components they can specify for the 890GX. Here’s a quick look at the variations between our test boards…

With the exception of the micro-ATX 890GXM-G65, the M4A89GTD PRO/USB 3 and the GA-890GPA-UD3H are both ATX boards. This accounts for the major weight difference between it and the two ATX counterparts. While the weight of a motherboard doesn’t necessarily have anything to do with performance, it may have to do with some of the components selected in the construction of some of the boards. Plastic is always lighter than metal and we’ll find that some of the boards definitely give you more of the good stuff.

Working our way up, all of our boards used a 128MB Hynix Memory module to support the SidePort memory on our HD 4290 Integrated Graphics solution (IGP) so we expect performance to be similar in terms of standard graphics performance. Other differences were very hard to spot. For example, we found out that the USB 3.0 NEC chip, despite being the exact same part number, varied in location of manufacturing. We will actually be shining a spotlight on this in our testing. 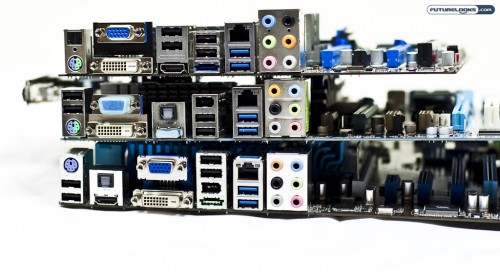 Other differences included slight variations in the networking solution and a break in the audio solution with the MSI board, going to an ALC889 audio solution vs. the ALC892 on the ASUS and GIGABYTE. Both solutions are known to be great performers but the ALC892 does have the advantage of being able to stream lossless formats like DOLBY True HD and DTS HD. I would have expected the micro-ATX MSI to have included this solution seeing as the board’s format does lend itself to being a better home theatre PC solution. The variations in the networking solution are not so significant as the chips are fundamentally the same.

All of the boards feature commonalities in connectivity which include DVI/HDMI, VGA and similar numbers of USB 2.0/3.0 ports. The MSI board does lack Firewire (IEEE1394) support so if you need that connection, you’ll find that the ASUS and GIGABYTE will likely be more to your liking. 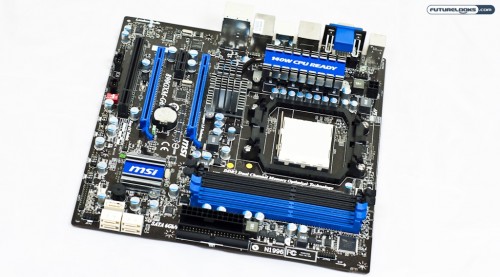 Starting at the bottom in terms of price point, the reasonably priced ($129.99US) MSI 890GXM-G65 was the only Micro-ATX solution out of the gate at launch and is the only Micro-ATX in our trio. It’s also one of two boards that feature CPU unlocking (through the BIOS) which allows you to discover that inner four core CPU from various two and three core AMD processors. Given form factor restrictions, the board also gives us the the fewest SATA 3.0 ports (five vs six) based on the SB850 southbridge and lacks Firewire ports as mentioned earlier. 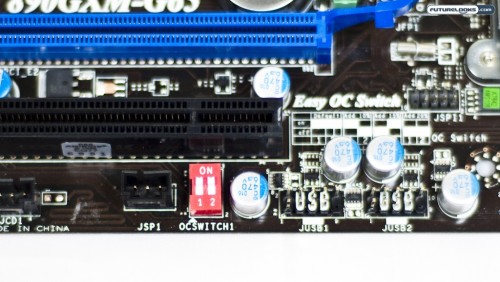 Unique features of the board include a hardware based overclocking function accessed by a couple of dip switches, allowing you to easily give your CPU a 5 – 20% boost in performance without getting into the BIOS. The board also offers all solid capacitors, heatpipe cooling and power savings via MSI’s Active Phase Switching (APS) technology. Coupled with its Micro-ATX form factor, we expect it to be one of the lower power solutions of our trio.

The board layout is logical, clean and the CPU socket area allows for ample room to attach even the largest of heatsinks. While all the features that support the 890GX are there, a quick visual inspection does reveal that the board just isn’t as well put together in some respects as the others. Some components are crookedly soldered onto the PCB and some of the connectors are fairly barebones in comparison to its 890GX brothers. I also found the VGA/DVI connector to be somewhat flimsy, possibly asking for a “breaking” moment.

Overall though, the MSI does offer everything that makes an 890GX board an 890GX board. Component flimsiness aside, if you plan on setting this up once and leaving it alone, I’m sure it will be fine. Especially if performance is up to par in the areas that are important to the platform. This is important as the board is part of their “Gaming Series” and gamers need reliable boards. More specifications and details can be found on the product page. Moving right along…